Battle of the Chips, Part I: AMD's CEO talks Epyc

While data centers are a complex combination of various pieces of computing equipment and industrial machinery all working in tandem like a great, living creature, at the heart of most lies the Central Processing Unit (CPU).

Servers form the center of a data center, and the chips within them the core of those servers – most of which are x86 servers, that is, servers which are backward-compatible with the instruction set which developed from Intel’s original 8086 and 8088 CPUs, starting in 1978. With most of the 8086’s successors ending in ‘86,’ the name stuck, as did the architecture.

In Q3 2016, x86 servers brought in 90 percent of the server market revenue, according to IDC. Outside the x86 sector, vendors like IBM and ARM fight for scraps. In this market, Intel has remained the uncontested champion… until now.

“We know how to win in the data center.”

Dr Lisa Su, AMD’s CEO, appears confident. We’re backstage, sitting in a small room just after the official launch of the Epyc server chip, where journalists, analysts and potential customers were presented with a bevy of impressive stats, selling points and partnerships.

“I think we’ve shown there’s a huge pent-up demand for different solutions. The current offerings in the CPU space, frankly, aren’t very flexible for all of these different workloads that are there. It’s more than just technology, it’s giving the customer the choice.”

Choice has indeed been lacking for some time in the x86 server market, currently dominated by Intel, which maintains a roughly 98 percent market share.

“At our peak we were at 25 percent, right now we’re at… let’s call it less than one percent,” Su said. “It’s all upside. I think a very reasonable goal for us, hopefully sooner than 2020, is to get back to double digit share. If we get back to 10 percent share plus – think about it, just the CPU market is a $16 billion market. That’s a significant opportunity for us, and that’s an intermediate goal, not the final goal.”

That 25 percent peak, achieved over a decade ago with the Opteron processor line, feels like a distant memory. “We became distracted and we were doing many different things, server was not the first priority,” Su told DCD in her first interview since Epyc’s launch.

“As I look forward, I see the data center space as a driver of high performance technologies and a showcase of what we can do. AMD has the potential, it has always been a company of potential, and my job with this management team has been to unlock that potential with strong execution.”

For Epyc, that journey started four years ago, when the company realized that pushing forward with the Bulldozer microarchitecture would not prove fruitful, and that it had to go back to the drawing board and design an entirely new microarchitecture - Zen.

“That was a big decision. But the corollary with that is that it would take us years. We were okay with that.”

The result is, by all accounts, a processor family that can contend with Intel’s best. Depending on the workload, or the budget, each vendor offers a compelling argument – but the fact that AMD is even considered in such discussions is a major improvement.

“I feel really good about our end,” Su said. “The differences that we’re talking about in terms of price performance, I/O flexibility, memory capability – these are not small differences. This is not about a price game, about buying sockets, this is about enabling someone to do something that they can’t do today, or something that used to be much, much more expensive.”

But while AMD has certainly upped its game, Intel has not rested on its laurels. Since Epyc’s launch in late June, the reigning champion released the next generation of Xeon processors.

Perhaps sensing that Epyc represents a greater threat than any of AMD’s recent efforts, Intel has launched an unprecedented assault on the rival processor family. Until recently, the company rarely referred to its main competitor by name; this time, it invited journalists to a special event, just before Epyc’s launch, to explain that the product was inferior.

Key to its argument was the fact that Epyc processors consist of four Zen-based dies in a single package, which Intel slammed as a “repurposed desktop product for server,” claiming it delivered “inconsistent performance from four glued-together desktop dies.”

When asked about the decision to go with four individual dies, Su told DCD: “Honestly, it was one of the best decisions that we’ve made, I love it. The biggest issues that we have in advanced technologies is that, as you get much larger die sizes, your yields and your costs go up.

“The way we’re able to offer all of this I/O and all of this capability up and down the stack is because of that decision we made to go with the multi-chip module approach. I think this idea of breaking up large die is absolutely here to stay, so I am very pleased we made that bed.” 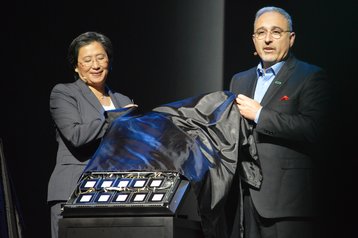 As with all commercial products, the true arbiter of whether the right decision was made will be the market. Early customers announced by AMD include Microsoft and Baidu in cloud computing, and the likes of HPE, Dell EMC and SuperMicro in the server space.

“I think you will hear about other cloud providers deploying AMD in the second half of the year,” Su said. In some cases, the main challenge has been to convince customers to put their trust in AMD, a company that may know about winning in the data center, but certainly knows about losing in it.

Two years ago, with large debts and no profits, its share price hovered below $2, and its future was being openly questioned.

“At the end, it always comes back to ‘are we reliable, do we have a good price-performance advantage, can they expect to use us for multiple years?’

“For many of these customers, if we only showed them Epyc, it would not have been enough, they’ve seen the second and the third generation, and that gives them confidence in investing in AMD.”

She added: “I view this as a long term investment. [Intel] are very capable, but I think we have shown that we can be very, very capable as well.”

The company’s share price had rocketed over the course of the week, gaining nearly 40 percent and standing at roughly $14.

The dark times of near-bankruptcy seemed behind them, but as I contemplated the rise and fall of AMD’s fortunes, I knew they still had a way to go.

AMD and Intel may be fighting tooth and nail over the x86 market, but they are actually strangely joined.

Since 1976, the two companies have shared numerous cross-licensing agreements to allow each partner to use the other’s patented x86 innovations after a certain time period.

While the agreement has changed over the years – with the 1996 deal ensuring AMD could no longer make direct copies of Intel chips beyond the 486 processor, or use the same bus as Intel’s chips – it has been fundamental in allowing both companies to work in the sector on compatible, infringement-free products.

The agreement is, however, canceled if AMD declares bankruptcy or is taken over.

The real reason for this partnership? Lawsuits. In 1991, AMD filed an antitrust lawsuit against Intel claiming it was trying to maintain an x86 monopoly. The court ruled against Intel, awarding AMD $10m and patent licenses.