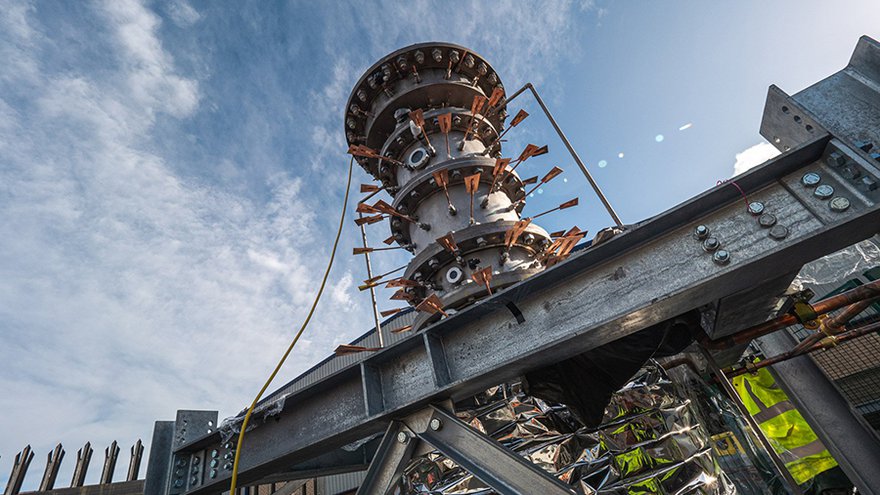 Outside a data center in Glasgow stands a bizarre-looking device. A metal cylinder, some four meters high, is studded with metal paddles. The paddles are all waving up and down, like the leaves of some sort of mechanical tree.

It is, hands down, the most bizarre and alien-looking piece of data center kit we’ve ever seen, but the company behind it, Glasgow-based Katrick Technologies, believes it is set to take the data center world by storm.

The thermal vibration bell (TVB) came seemingly out of nowhere, popping up at a Glasgow data center, during the COP26 climate change conference in November, accompanied by stirring claims from Katrick.

With a launch event during COP26, the bell has drawn members of the British and Scottish parliaments, including Ivan Paul McKee, Minister for Business, Trade, Tourism, and Enterprise in the Scottish government.

The bell is “a new refrigeration cycle” according to Karthik Velayutham, founder and co-CEO of Katrick, which has a patent application for the system, whose internals fully match the novelty of its exterior.

The system uses two different cooling fluids, Velayutham explained to DCD, and it works because of their different properties.

In a large drum at the base, hot water from the data center’s primary heat removal system passes through a heat exchanger, giving up its heat to a coolant which surrounds it. This coolant has a high density, so it remains in the lower part of the bell, but has a low boiling point, so it starts to bubble.

These bubbles rise through a grille into the top half of the bell, where they pass through a second coolant, with a low density and a high boiling point.

As well as taking the heat energy from the bubbles, the top part of the bell harnesses their mechanical energy. The bubbles agitate paddles in the coolant, each of which connects to one of the waving leaves outside the bell.

Each paddle has two ends: one blade inside the bell absorbs heat and is moved by the coolant bubbles. And the second blade, outside the bell, gives up its heat - a process accelerated by the agitation of the paddle.

The outside paddles radiate heat, and the motion created by the vibrations accelerates that heat loss, explained Velayutham.

As a passive system, the bell simply uses the heat input to drive the cooling mechanism. This is in contrast to a conventional chiller which, like any air conditioning system, needs electricity to drive the mechanical energy necessary to deliver cooling.

It’s part of a portfolio of thermo-mechanical systems which Katrick is developing, along with an energy harvesting system, which is effectively a novel wind turbine, whose unconventional fan blades can gather energy even at low wind speeds. As well as placing its thermal bells at data centers, Katrick wants to build walls of these turbines alongside roads and airports, to passively gather green electricity.

Underlying many of Katrick’s inventions is the uni-directional string mirror (UDSM), a multi-point conversion system, which captures vibrations from a given surface area, converges them to a focal point, and converts them to energy.

In its wind patents, the company uses the UDSM to harness small amounts of vibrational energy, which can create usable power

As the company explains, “vibration to power is a known process which has been in use for over a century. When you talk over your phone, the sound (which is a form of vibration) is captured by the microphone and converted to electricity.”

The company believes that UDSM is efficient enough to create usable energy from a variety of sources, including wind, waves, and heat.

“Heat is a low-quality form of energy with atoms moving randomly,” says Katrick’s site. “By capturing and converting them into mechanical vibrations they are transformed into a highly organized form of energy. We can extract this energy efficiently through smaller pockets to capture and provide higher quality power.”

In the case of the thermal vibration bell, the energy may be organized, but it is not harnessed further. Although the paddles move, their motion is not converted into electrical energy or any other form of useful power.

Instead, the energy is used directly, to help radiate heat, replacing energy that would otherwise be required to drive conventional chillers.

Velayutham came up with the UDSM concept while studying waves and looking for a way to harness their energy. It was tested at the University of Strathclyde’s Naval Architecture, Oceans, and Marine Energy (NOAME) department, which established that a UDSM device can capture and converge vibrations.

A three-month project at NOAME confirmed mechanical vibration can be captured by a panel, converging the vibration to a focal point with an energy increase of over 250 times, a lens effect later increased to 400 times.

Internationally, also worked on the concept with thermal engineers at Indian consultancy Energia India to prove heat energy can be converted into fluid vibrations in the bi-fluid bell. That project found the heat engine can convert up to 30 percent of thermal energy to mechanical vibrations.

No matter how good, ideas like this can languish on the shelf, unless there’s an industrial partner willing to take them on.

Katrick signed with local data center provider Iomart, to test the TVB at its Glasgow data center during October 2021. Iomart, like many other providers, has been keen to adopt renewable energy, and also reduce the amount of energy it uses to cool its data centers.

The bell is several steps more radical than simply moving to renewable power or cutting waste, but Iomart CEO Reece Donovan has been impressed with what he has seen: "Initial results have been very pleasing. We think we can save up to 70 percent of our cooling costs, and 25 percent of our overall energy usage."

To create the test system, Katrick decided to build a module with a capacity of 120kW, a substantial but not excessive capacity, and one which would make a measurable difference to most data centers’ thermal performance.

Katrick visited multiple facilities, to come up with a useful design, says Velayutham: "We measured their,layouts, and we believe 120kW is a very good number."

The actual prototype was built by a boutique manufacturing company in Glasgow, but could easily be scaled up.

Katrick believes the system can replace conventional chillers, and can be retrofitted where those chillers are connected to a chilled water cooling circuit.

"We are doing testing to apply this technology to any type of data centers, whether it's air-cooled, or water-cooled or liquid-cooled"

Velayutham says it could be applicable in many climates, but concedes it will be most applicable in temperate regions like the Northern hemisphere countries where most of the world’s data centers are located.

"Technologies which are easily adaptable, should be accessible to everyone around the world," says Velayutham. "We are doing testing to apply this technology to any type of data centers, whether it's air-cooled, or water-cooled or liquid-cooled, even systems that would come in five years' time."

But any business building the system is likely to remain in Scotland, says Velayutham. A graduate of Strathclyde University, he has worked in the Glasgow area, in marine engineering, as well as energy systems since them.

He’s a firm believer in keeping the technology where it was born, he told DCD: "We have done extensive research on the costing. We want to make everything in Glasgow. I started this in Glasgow, so I want to stick to Glasgow."