Checking up on healthcare IT

Some companies saw demand dry up, while others struggled to keep up with a surge in activity. Getting the transition wrong could have meant the end of a firm’s existence, as users shifted to faster platforms more suited to the new world. 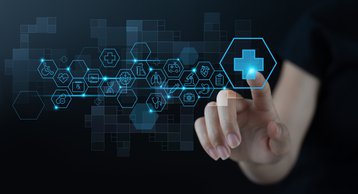 But for the healthcare sector, this digital transformation was a literal matter of life and death.

“The pandemic accelerated the change,” says Bashir Agboola of the Hospital for Special Surgery (HSS) in New York City.

“Part of that shift has also been a change in where technology gets deployed and where computing occurs and where data is stored and manipulated,” Agboola explained during a DCD>Debate on the healthcare sector.

“More and more is going from on-prem data centers into cloud facilities. That is what has allowed us to have the successful response that we have had over the past two years to the pandemic as far as technology and care delivery is concerned.”

Agboola is a firm believer in what the cloud can do for the future of patient care.

“I am hearing the same conversation at other healthcare providers - should we spend millions of dollars upgrading our data centers, or do we just begin to move workloads into the cloud?,” he said.

Exploring the latest enterprise data center and hybrid IT trends

“More and more, particularly those with aging data centers, are beginning to move their workloads out. They're not investing in data center infrastructure anymore - no one wants to spend tens of millions of dollars to upgrade a data center.”

Expertise is the crucial factor

But in a separate DCD>Debate, the company’s senior director of data center services, Keith Montalvo, was a little more circumspect.

“I think one way I decide whether to outsource or do it in-house is how quickly does the technology need to be deployed,” he said. “Do we have the expertise in-house to implement or not?”

Agboola also cited staff expertise as a critical factor, noting that the shift to cloud will require new staffers versed in cloud technologies, “but remains a challenge to find strong talent to help you with that journey.”

Shane Brauner, CIO of biotech software company Schrödinger, concurred: "For a lot of businesses, I don't think running a data center or replacing hard drives in a system is super core to their business. So being able to take our resources internally and move them to start building talent as a cloud engineer, rather than racking servers, it's a game-changer."

One way I decide whether to outsource or do it in-house is how quickly does the technology need to be deployed. Do we have the expertise in-house? Keith Montalvo, HSS

Montalvo cautioned that losing too many data center technicians has its drawbacks - especially when it comes to colocation usage.

“I think one of the things I'm seeing in the industry is, as folks farm out their internal data centers, and maybe leverage colo space more, the internal knowledge about critical infrastructure, like power and cooling, and even, just regular facility infrastructure is kind of being lost,” he said.

“We're becoming more dependent on the colos to manage all that. And I think there is a due diligence internally that we need to maintain some knowledge about facility design to keep our colo partners honest around redundancy.”

Montalvo believes that “anyone looking to go to a colo should have an audit checklist of things you're going to ask the colo about their infrastructure: What kind of cooling do they have? Is that redundant? Do they do adequate testing on the generators? Is it weekly? Is it monthly? What is the capacity of those generators? What are the switchover systems? What is the end of life of those critical pieces of equipment? And when do they look to refresh them?

"These are all things that I think, internally, companies should be armed with.”

Cloud is the future

While HSS and other healthcare providers are maintaining some on-prem presence, and expanding into colocation, the future lies in the cloud, Agboola said.

“In my organization, when we put together our enterprise cloud strategy, one of the key decisions we made was that we will build net-new capabilities in the cloud, rather than trying to build those on-prem,” Agboola said.

“And then we think about cloud migration for other stuff opportunistically.”

The cloud allows for new tools and systems “to be quickly ramped up,” he continued. This is what is being demanded by customers, “as they come to healthcare with experience working with retail and banking. There's so much change there, where many consumers have never set foot into a banking hall in a long time. They do all their banking remotely, with technology.

“Consumers have similar expectations of healthcare providers,” he said, something only popular with the cloud.

"We really have no choice, if we fail to reinvent digitally, it will be the end of the business.” 