Fortune on the high seas

To support the growth of global Internet traffic, investment is flowing into laying vast submarine cables that stretch across the oceans.

Ships 140 meters in length, specifically designed for this complex task, plow the continental shelf, burying cables up to three meters under the ocean floor. Remotely operated vehicles scan the depths, looking for underwater walls, jagged rocks, trawl scars and sunken ships, searching for the perfect pathway across thousands of kilometers of hostile terrain. 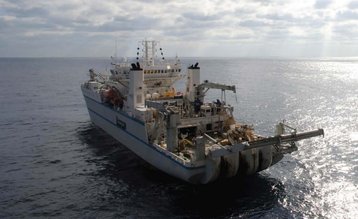 This epic undertaking is fundamental to the continued expansion of the digital era, with an estimated 99 percent of all transoceanic digital communication being carried by these fiber optic cables. But with cables costing anywhere from $200m to $1bn to put in place, only a few companies can afford to do this, and where they decide to place their cables will have a profound impact on how the future of the internet is developed.

The average submarine cable has a design life of 25 years, but “the economic useful life, financial useful life, is something much shorter than that, probably about 12 to 15 years,” said Debra Brask, VP of Project Management for TE SubCom. “It’s mainly because technology changes and then the per bit cost goes down, so it almost becomes more expensive to manage the older networks.”

But for those 12 or so years, that cable remains the backbone of oceanic data transfer in its region and a whole ecosystem is built around it. “More and more cables, and more networks, and more clouds come in to collect the capacity,” said Ihab Tarazi, Equinix CTO.

“The biggest thing for us here is that the global backbone will point towards our data centers.”

Whichever companies take advantage of cables laid now stand to reap the rewards for the next decade. Equinix, in particular, has eagerly jumped into the field, announcing its involvement in 12 different projects.

Perhaps its most technologically important project is the Monet cable, stretching from Florida in the US to Praia Grande in Brazil. Laid by TE SubCom, and funded by Google and several South American telecoms companies, the 10,556km (6,560 mile) long cable does something few submarine cables have done before – it travels directly into the data center.

“What we did is we worked with Google closely and built a new model that allows the two of us to be able to land the cable system in a data center without the need for a cable station or a network in the middle,” Tarazi told DatacenterDynamics.

“The biggest thing for us here is that the global backbone will point towards our data centers if we continue to execute and win more and more of these cables, which is very good for us and our customers,” he added.

Submarine network provider Aqua Comms has worked on similar technology for its own cables: “We can light from data center to data center,” said CEO Greg Varisco. “To be able to do that direct optical-to-optical lighting, you eliminate a lot of additional equipment and optical-electrical-optical conversions in the middle. That doesn’t happen in the cable stations any more.

“All of a sudden a government of a country can say ‘no you can’t be here’.”

Future cables will likely follow this approach, but one question remains: How many new cables will there be? We are in the middle of a boom, but it’s unclear how long this will last.

“Traditionally, it’s been a very cyclical market,” said Brask. “In the past, what you would find is that there would be many long international cable systems built over the course of about three years.”

After this, feeder systems and smaller networks are built: “So you basically expand off those large pipes into these other smaller systems. But they’re much smaller, so obviously the total market value goes down.”

The last submarine expansion was in the 1990s, driven by the dotcom boom. International operators laid cables frantically in order to corner an expected future market.

In 2001, traditional telecoms companies spent $13bn on international fiber. Then it all went wrong. By 2003, firms including Verizon and Global Crossing had gone bankrupt, spending was down to $1bn, and the world had a glut of unlit fiber.

The telecoms crash was caused partly by the bursting of the dotcom bubble, but also by the invention of dense wave-division multiplexing (DWDM), which increased the data capacity of fiber 100-fold. It’s taken years to use that capacity.

In the new boom, the focus has shifted from Western telcos to cloud providers, and Tier-I carriers in Asia including China Telecom, China Unicom and Korea Telecom.

Google, Microsoft and Amazon are all heavily invested in building a huge submarine network that will support an era where zettabytes of data will be transfered. But will they too slow down cable expansion after this wave?

“You want to always try to strive to keep things as flat as possible and not so cyclical, but we just build the systems, we don’t drive the demand,” she said.

While the iron is hot

“I think there’s going to be a need for sure to have these systems for a very long time.”

For now, though, while the demand lasts, there is still a fortune to be made on the high seas. Data usage is growing, and the aging underwater infrastructure will not be up to the task - especially with the redundancy and latency requirements of modern cloud providers.

But to place these cables takes time, money, and political wherewithal. “All of a sudden a government of a country can say ‘no you can’t be here’,” said Brask.

Permits, one of the most time-intensive aspects of submarine cabling, can take over two years in countries like China.

Elsewhere, like Taiwan, there are defined cable corridors, but these corridors of power come with their own risks - a 2006 earthquake in the country took out several cables and temporarily cut off communication to parts of China, Hong Kong, and Southeast Asia.

Legislation, military actions and the need to diversify routes will help define the pathway and landing points of these cables, affecting the nations that they land on and those around them.

In developing countries, where the digital infrastructure is still lacking, cables can only take the country so far.

“We had built a system on the West Coast of Africa called Main One a while ago, and you basically got into the cable station, but there was still struggles to get that into a city center, a PoP, a data center, and that took a little while,” said Brask.

The future will likely see some of those customers served via satellites. “There’s new satellite technology, and we’re going to make some announcements on some of them,” Tarazi said.

“These satellites put in now can use new coherent advanced optics – the same ones they use underwater – and with that you’re going to be able to squeeze a lot more capacity into satellites, so we see satellite distribution as a second option for places that you cannot get to so easily with cable. But fiber will always be number one in its capacity, and satellites will be filling in the gaps in places that will be hard to get to.”

Brask agreed: “I think there’s going to be a need for sure to have these systems for a very long time. I don’t see what replaces fiber-optic cables. I see that you would have to have them to truly carry bandwidth between countries. To have a world wide web, and to use it to its fullest, you’re going to have to have submarine cables.”

A version of this article appeared in the October issue of DatacenterDynamics magazine.