IBM has a problem. The storied company is trying to reinvent itself as a cloud computing business, shedding entire business segments and staff as it pivots from services and legacy hardware.

Getting out of declining sectors makes sense, but it means that instead IBM is putting all of its hopes into one of the most competitive markets around, one dominated by well-funded titans like Amazon, Microsoft, and Google.

To pull this off means not engaging head-on, but trying another approach. "I think we are going for something different," IBM Cloud CTO Jason McGee told DCD.

"And that difference is really a recognition of the realities of enterprise IT and the complexities of the mission-critical workloads that people need to run to operate their businesses. Our approach has been to build location independence, hybrid and multi-cloud, deep into our architectures."

This feature appeared in the December issue of the DCD Magazine. Subscribe for free today.

Shifting to the cloud 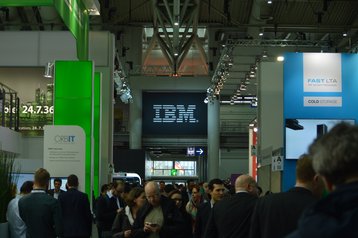 Part of that strategy is seen in the company's embrace of OpenShift, developed by Red Hat - which IBM acquired for a whopping $34bn in 2019. “We're really pushing our clients to build their applications on a platform that allows them the freedom to run wherever,” McGee said.

The container platform is the backbone of a new service Big Blue launched this year, IBM Satellite. This is "really our distributed cloud model, where we can take IBM cloud services and we can run them back in your data center, or we can run them on Azure or Amazon, or we can run them at the Edge of the network,” McGee explained.

“And so you can get that kind of full as-a-service public cloud experience in any location that a customer needs to be able to run their workloads.”

There are numerous companies, large and small, trying to serve as a cloud facilitator for businesses early in their cloud transition, ideally helping firms best place their workloads. Few, however, offer their own cloud services, something that can either be seen as an advantage for IBM or a conflict of interest.

McGee asserts that IBM believes companies should “use the best provider for the capability that you're targeting, and then we can wrap that in a common approach.” That could mean using IBM Public Cloud “for pockets where it is really strong,” like high resiliency, high security, regulated workloads, or it could mean using other clouds. “Like for SQL Server databases on the cloud, Azure might be a good destination for that.”

Then there’s “a lot of grey area where, frankly, IBM Cloud, or Azure, or Amazon could fit the bill. So then it just comes down to what the customers' current choices are."

This strategy has seen some success for McGee’s division, with its Q3 revenue increasing by 19 percent to $6 billion, its best quarterly growth yet. "It's been a great year for IBM Cloud,” McGee said. “I don't think this is Earth-shattering information, but with the pandemic, and people shifting to working at home, it has really accelerated cloud adoption.”

But such acceleration was unable to offset the wider decline at IBM. In May, it began what is thought to be its biggest round of layoffs in a decade, totaling some 20,000 employees. This October, around 10,000 European employees were told they would be let go. Much of this was due to issues that predated the pandemic, but the virus exacerbated problems, causing revenues to plummet.

It’s unclear how heavily IBM Cloud was impacted by the ongoing layoffs, although the related Power division is thought to have been reduced significantly. Our amicable conversation screeched to a halt when the topic was raised. “It’s not something I’m going to comment specifically on,” McGee said.

"That's a different part of the [wider IBM] business," McGee said. "Obviously that part of the business does a lot of work building and running applications on cloud and moving workloads to the cloud. They've done that as part of IBM, and I suspect they will do that as partners of ours going forward, as they become an independent organization."

Should that happen by the end of next year, IBM will be a much smaller company - and one it hopes will be much leaner.

This was a decision made before Covid, but McGee believes that a bet on the cloud makes more sense now than ever. "I think that the acceleration of cloud adoption will stick because I think people were forced to accelerate given the circumstances," he said.

"And by being forced, they realize that they can move more workloads to cloud than they thought, so I think it's helped to eliminate some of the wait-and-see skepticism or hesitation."