After years of slow growth, a flurry of investments and partnerships heralds India’s digital expansion

In recent months, Digital Realty and Brookfield have formed a joint venture to develop data centers in India. So have Iron Mountain and Web Werks, EdgeConneX and Adani, and Yondr and Everstone. 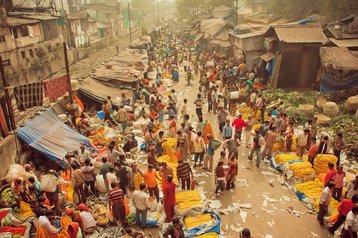 This flurry of investments is the result of a confluence of factors. First, there's the very obvious huge market opportunity - the country has around 624 million active Internet users, which could grow to an astronomical 900 million by 2025 according to the Iamai-Kantar Icube 2020 report.

Part of this is thanks to the Digital India initiative, a massive $15bn+ government effort to connect the sprawling nation over the past six years. While there are a number of legitimate criticisms of the flagship government project, which may not have been as transformational as was once hoped, it has helped connect millions, and brought a number of government services online.

At the same time, the entry of the country's largest private-sector firm into the mobile network space in 2016 sparked an intense price war that brought mobile data into the hands of millions.

When Reliance Industries and its subsidiary Reliance Jio Platforms (India's largest telco) launched the Jio 4G mobile network in 2016, it ran it at a loss to quickly amass hundreds of millions of subscribers. Over the following two years, the average revenue per gigabyte fell 95 percent, according to Credit Suisse.

Backed by his oil fortune, India's richest man Mukesh Ambani was able to rack up tens of billions of dollars in debt, and forced others to do the same. It almost destabilized the entirety of India's telecoms sector - and even helped push the related, but separate, telco Reliance Communications into bankruptcy (with Vodafone Idea possibly set to follow) - but the price war has eased since late 2019. During this time, it has helped massively increase the penetration of the mobile Internet.

Prospective data center builders should also be aware of the regulatory environment. While by no means perfect, operating in India is less morally and legally difficult than working in neighboring China.

A long-touted Personal Data Protection Bill threatened to enforce aggressive data localization rules, prompting a surge in data center building. The revised version now only calls for keeping "critical personal data" within the country, but this will still require huge quantities of storage.

Data centers were added into the National Building Code in 2016, simplifying some of the site selection and planning approval process, although it is still a complex bureaucratic process - with companies often having to get approval from as many as 36 government departments to begin building.

Following an effective lobbying campaign, the government is considering a National Data Centre policy which would class facilities as infrastructure, and simplify the approval process to a single-window system which also covers power availability. However, the policy may focus on just a handful of key zones - starting with Navi Mumbai, Chennai, and Hyderabad.

Individual states are also developing data center policies, with Tamil Nadu the latest to say that it is working on a special set of policies to encourage investment.

Finally, India's existing data center market is proving enticing for investors. The country lacks the domestic cloud giants which dominate the sector in the US and China, but a number of Indian data center companies have now operated long enough without issue for foreign investors to feel comfortable partnering with them.

"But we can't deliver a like-for-like product [as we do in the West]," he explained.

The country is mobile-first - with the overwhelming majority of Indian Internet users connecting via smartphones, and many not owning personal computers at all.

"It's important to have the right partners that position us to solve for that mobile-first world and some of the infrastructure required to enable their transition," he said. "There's more mobile subscribers in that market than there are people in North America. So it's a massive market that has some challenges in infrastructure."

In 2019, Brookfield Infrastructure acquired 130,000 communication towers from Reliance Industrial Investments and Holdings Limited (another Reliance Industries company), which are used to form the backbone of Reliance Jio’s telecom business.

The $3.7bn sale helped alleviate some of Reliance's spiraling debt pile, while it remains the anchor tenant for the next 30 years.

It also opens up opportunities for Brookfield to connect to data centers. "Brookfield helps us with getting more aligned and looking at the cell towers and how some of these mobile subscribers are coming into the infrastructure," Sharp said.

What the 50:50 joint venture won't involve, however, is putting Edge data centers at the base of cell towers, as was mooted by some operators in the US and Europe at an early stage of the Edge hype cycle.

"Quite frankly, with Edge we really haven't seen the workload that needs to be based at the foot of the tower - that's just not here today," Sharp said.

"And so with Edge in general, not just in India, we constantly look at how the spectrum is being deployed, and where the breakout happens because that breakout is where you can place applications which then can leverage the spectrum. So the breakout is a critical element."

He added: "But equally important is the workload, and the workload is going to have power, density, and latency requirements."

In this way, India is very much like any other market - one must understand what the user needs, and what the infrastructure can provide.

But, Sharp said, India has one key advantage over more mature markets. "There's a rapid innovation because there's not the technology debt that exists in other markets," he said.

With additional reporting by Peter Judge