“Nothing to lose” - AMD and its fight for the server market

For AMD, the story of the data center is one of loss. Once a major player in the server market, its “market share rounds to zero percent right now,” AMD’s Forrest Norrod told DCD.

Now, the company is ready to fight for the data center once again.

Based on the new Zen microarchitecture, AMD’s Naples System-on-Chip (SoC) for the x86 server market will appear in the second quarter of 2017, representing the first true threat to Intel’s dominance in nearly a decade. 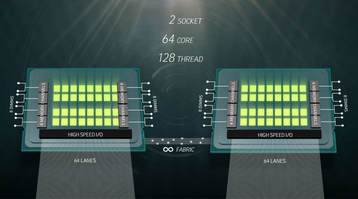 A moment of Zen

In 2003, AMD was an ascendant force in the data center, with Opteron chips helping the company gain nearly a quarter of the market in just three years. But then Intel hit back, its Core microarchitecture outperforming and outselling Opteron and causing AMD’s market share to wither away as it failed to produce a viable competitor.

Norrod is now SVP and GM of the Enterprise, Embedded and Semi-Custom Business Group, but at the time of AMD’s decline he was at Dell, running its data center solutions business. “As a customer I would say that AMD got a little unfocused and, perhaps because of that lack of focus, had some execution issues, and this is a tough business and a tough race.”

“We lost our way, we stopped delivering high performance and, at the end of the day, the data center is all about numbers. Because if you think about the cost of the server  - the CPU’s maybe 30 percent give or take, if you’re 30 percent off of the high performance benchmark, your product can be free and you’ll lose the TCO calculation, at least for acquisition cost.

With Zen, Norrod believes AMD has found its way, while Intel is the one that has become lost.

“Intel has some very, very, very, very high price server processors whose margins greatly exceed that of the one dollar bill. Even if I had a product - and I think I will have a product - that can compete with those, I’m not going to price something at 8-9 thousand dollars a socket, that’s ridiculous.”

In fact, Norrod sees AMD’s lack of any real positioning in the market as a strength: “I’ve got nothing to lose. Disruption of any segment of the market doesn’t hurt me at all, so I’m unconstrained.”

Intel, on the other hand, “has this elaborate segmentation model for their product line and for the market, it’s very involved and in terms of just the number of custom SKUs - ‘custom,’ put that in quotes, it’s not very custom at all - custom SKUs they do for different cloud customers, when they launch products for cloud availability versus enterprise availability.”

Without these special deals to worry about, Norrod feels that AMD can do what it wants in the market. It has no 4-socket business to worry about, while “Intel has a hugely profitable 4-socket business so they want to limit the capabilities of the 2-sockets so that they’re not further encouraging the migration of workloads off of 4-sockets into two.

“So that’s one of the reasons that they’ve limited the two sockets in the way that they have.” 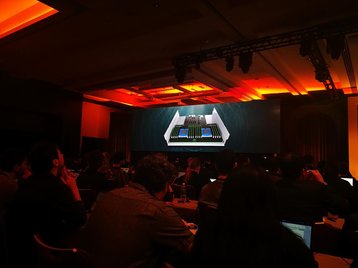 That brings us to the stats

Naples is a 32-core System-on-Chip design, with support for two high-performance threads per core, and eight channels of memory.

In a 2-socket server, it has support for up to 32 DIMMS of DDR4 on 16 memory channels, delivering up to 4TB of total memory capacity. Naples also features high-speed I/O supporting 128 lanes of PCIe 3.0, meaning that it does not need a separate chipset.

More cores, Norrod said, is the “dirty little secret of the industry” as it “is that’s the only practical way forward for increased performances.”

He added: “We’re running into some fundamental laws of physics to keep turning up clock frequencies, and clock frequencies really haven’t increased in a decade, and we’re running into a lack of ideas to continue to increase single-threaded performance. There’ll be incremental improvements, but there are no giant leaps forward, so it’s got to come through multi-threading.”

“We’ve made our bed in that we’re going to produce parts that recognize that reality, that are well-tuned for where we think the data center is going, so that you can efficiently get access and use all the power of these multi-cores. We’ll continuously add more cores, and we’ll add more I/O, memory bandwidth, et cetera to keep that system in balance, and keep all of that power usable.”

AMD’s comparisons and comments came ahead of Intel’s announcement that it was bringing Skylake to the data center, starting with a partnership with Google Cloud. Skylake’s AVX-512 promises to double the floating-point performance for the heaviest calculations over Broadwell.

The future of the data center 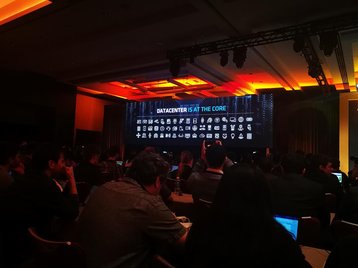 “When I look across the data center, the one constant I see is change. And I think that, from our point of view, that provides a tremendous opportunity for us,” Norrod said.

AMD is not aiming for a specific segment market, but instead at specific workloads. “The way that we’re viewing this is: we think we’ve got a great general-purpose x86 server that’s applicable across a broad range of the market. Great, okay. But I don’t want to compete just on that basis, or compete on price, or performance,” Norrod said.

“I want to bring back to the market - similar to what we did originally with Opteron - systems that are demonstrably superior for certain workloads.”

AMD helpfully provided reporters with its own benchmarks, stacking its chips up against the (once again, Broadwell) Xeon E5-2699A V4.

When going through ten iterations of a seismic analysis consisting of one billion samples, it was two and a half times faster (14 seconds to 35 seconds). When the dataset was upped to four billion, it managed it in under a minute, while the Intel system had insufficient memory to even load the dataset.

The future of Naples 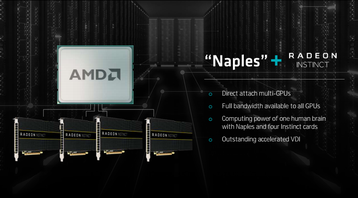 Key to getting companies on board with Naples when it is released is a promise that AMD will stick with the platform for the next few years.

“AMD has some measure of credibility and trust in the market, because we were there before, but it’s critically important that as we get in, we have a roadmap, and we execute reliably.”

He continued: “I want to be boring as hell in our execution and delivery, I want to be as unpredictable as possible - particularly with regard to Intel - with what we’re targeting, and the differentiation that we’re going to add on with each successive iteration.”

Going hand in hand with AMD’s drive to get Naples inside the data center is the efforts to push its Radeon Instinct GPUs into servers, an initiative we covered in detail last year. So far, the company has announced partnerships with Google and Alibaba, but has declined to provide specifics as to the scale of these initiatives. Google last month began offering Nvidia GPUs from its cloud service.

The future of servers

“I really do fundamentally believe that competition is good for Intel,” Norrod said. “It will push them to be a better company and do better products that more closely align with their customer’s needs. In the long run, that’s good for them.

While Naples may not bring Intel’s ruin, AMD does hope that it will prove at least a worthy foe. “I think there’s a huge pent up desire for a credible alternative. I think that’s very, very clear. And I think that’s good, and we’ll certainly leverage that,” Norrod said.

“I do think Naples is going to be a success. I think we understand that we’ve got a good part, it will be very good for certain workloads - by the way, Intel will be better at some other workloads, I am very sober and hopefully realistic in this assessment.”