Sixty days after announcing the Open Data Platform (ODP), which claims to unite various analytics offerings, Hortonworks has found other Hadoop players distinctly unimpressed at the Hadoop summit in Brussels.

ODP was intended to “take the guesswork out of” Hadoop analytics projects by providing a “common core platform”, according to the vendor’s website, and ODP members including Hortonworks, IBM, and Pivotal all shipped OSP-compliant offerings at the Summit. But other Hadoop vendors argued that ODP is at best unnecessary, and Hortonworks investor HP also declined to join, saying its customers are not interested.

The Hadoop Summit included a lot of other news which will have to wait. Today’s report is about the initiative which got pride of place in Hortonworks’ keynote: ODP. 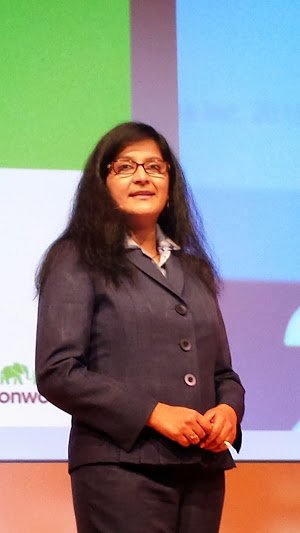 ”We are thrilled to join the thought leaders in ODP,” said Anjul Bhanbhri, vice president of Big Data at IBM. ”We view it as a huge win-win for customers as well as technoligy providers.”

ODP specifies that Hadoop offerings should contain a common set of core Apache Foundation technologies, including Hadoop version 2.6 (which includes Yarn, Mapreduce and HDFS) and the Ambari management tool.

Bhambhri said there was a danger of fragementation in Hadoop, but ”with ODP we have finally put an end to that nightmare.”

ODP has met with profound skepticism outside the small group endorsing it, with many pointing out that Ambari only works with Hortonworks’ distribution - even though it is a genuine Apache Foundation project - and arguing that a restricted set limits the flexibility of an open movement.

A TechRepublic article by Matt Asay argues that ODP will - and should - fail.

“The Pivotal and Hortonworks alliance, notwithstanding the marketing, is antithetical to the open source model and the Apache way,” said Cloudera’s Mike Olson when ODP was announced. ”As a vendor-driven consortium, membership is only for enterprises with serious money – it ought to be called the ‘Only Dollars Play’ alliance. The price of entry is beyond the means of precisely the people who really drive the Hadoop standard – the individual engineers who participate in the Apache projects, and who actually bring the code.”

Gartner analysts Merv Adrian and Nick Huedecker pointed out that Pivotal only joined ODP after failing to establish its own Hadoop distribution - saying that ODP gave it a way to “reduce its investment in a failing effort to build a proprietary way to capture a slice of this trend. Declare victory and retreat.”

Preaching to the converted

Forrester analyst Mike Gualtieri disagees with this assessment. At the Summit, he told DatacenterDynamics that ODP is “good for innovation” and the inclusion of the Ambari module will help with lifecycle management.

Ambari allows Hadoop clusters (based on Hortonworks’ distribution) to be launched and managed, but both Cloudera and MapR, present at the Summit, told DatacenterDynamics that their own management software - Cloudera Manager and MapR Control System - is superior, and well established. They and their customers don’t see the need to join ODP.

ODP certainly got a lot of praise form IBM and others on stage during an extended keynote session with Hortonworks president Herb Cunitz and CEO Rob Bearden. But this was no surprise, as the Summit is sponsored by Hortonworks (and Yahoo) and is understood to be effectively a Hortonworks trade show.

It’s in the nature of the Hadoop community that the other players show up at Hortonworks’ event (and similarly to Cloudera’s Hadoop World), but no-one outside the litle ODP group seemed to complain of incompatibility or difficulty porting between Hadoop versions.

Cloudera marketing manager Alex Gutow said diplomatically that ODP did not do anything that Cloudera needs, but MapR architect Ted Dunning told us that ODP actually answers a real question - just not the one it says it answers.

Hortonworks has a very purist approach to open source, and will not launch any software that is not part of an Apache Foundation project, the company’s marketing manager John Kreisa told us. But Dunning says this leaves Hortonworks with a problem: ”Hortonworks hsa no differentiating technology.” For Dunning, ODP is a step backwards because it enforces a lack of distinction with “no one allowed to extend it”, but this would disallow a lot of positive differentiation, which is possible within an open source ecosystem.

All this might be understandable and predictable. Any open source project, even in the most rapidly expanding market, will one day reach a point where the major players are in competition.

But indifference to ODP extends even to Hortonworks’ camp itself. HP invested $50 million in the company before its IPO in 2014, and attended the Summit as an enthusiastic supporter - but has no intention of joining ODP.

“We don’t see a large demand,” said Chris Selland, HP’s VP of business development for Big Data. “It’s not answering our customers’ questions.” Instead, he said HP’s approach is to embrace the developer community, where a huge variety of ideas are emerging, including the Trafodion project with the unlikely aim of running online transaction processing on Hadoop. “There is so much innovation going on,” said Selland.

Kreisa stuck to his guns, arguing for the benefits of ODP in allowing innovation - such as Pivotal’s Hawk and Gemfire.

Confronted with HP’s rejection he simply said: “That’s their view.”