The Edge of Mars

What’s the most remote IT system in everyday use right now? The Perseverance rover on Mars

Edge computing is designed to help when applications need a fast response, but are a long way from central IT resources. The most extreme example of this right now is a self-driving vehicle doing detailed science work, 62 million km away from Earth on the surface of Mars.

NASA’s Perseverance rover has to handle its environment in real time, but signals take 12 minutes to go from there to NASA’s Mission Control. Besides the delay, Internet communications over that distance are unreliable, so Perseverance has to be prepared to make a lot of decisions locally.

Despite these demands, the tech deployed to Mars is quite modest: the whole Perseverance rover is managed by the same type of PowerPC 750 processor which powered Apple’s Bondi Blue iMac back in 1998.

There’s already an installed base on Mars: the Curiosity rover which landed in 2012 has the same processor, and is still in operation. But the Martian environment provides even more compelling reasons to stick with this technology.

Due to its more recent design, the tiny Ingenuity drone copter, a passenger on the Mars mission, actually has a somewhat more powerful processor, the Snapdragon 801, which featured in 2014-era smartphones such as the Sony Xperia Z3.

Yet all this kit is making unbelievable achievements. Even before it begins its scientific study, Perseverance handled its February 18 landing perfectly, analyzing wind patterns and the behavior of its heatshield during its supersonic entry into Mars atmosphere, and then using AI to identify a landing site and steer towards it for touchdown.

The entry, descent and landing (EDL) had to be fully autonomous. The probe plunged through Mars’ atmosphere, at a speed of 12,500mph, and a peak temperature of 1,300°C, but NASA engineers on Earth could not take a hand at all, because the whole descent took less than seven minutes. Before NASA saw Perseverance start to fall, the rover was already sitting on land.

This article appeared in Issue 40 of the DCD>Magazine. Subscribe for free today 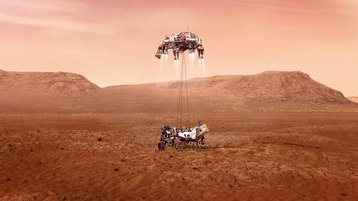 NASA has operated five rovers on Mars, but Perseverance was the first to land with its eyes open.

The heatshield and back shell was studded with 28 sensors; for the first four minutes of its descent, the searing temperature and pounding of the atmosphere were recorded by thermocouples, heat flux sensors, and pressure transducers.

When the parachute opened, the heatshield and its sensors was jettisoned. The data was stored for transmission back to NASA - and represents the first detailed data from a Mars landing.

This means future Mars missions can have heatshields designed with data from an actual landing, not a simulation. NASA expects this will allow them to make better heatshields which weigh 35 percent less.

The pressure sensors will tell NASA about the real dynamics of the Martian atmosphere, including the low-altitude winds it hit as it slowed from supersonic speed. Future missions will be able to predict the weather, and landing with more control, in a smaller footprint.

Perseverance’s landing target was 4.8 miles by 4.1 miles, already three times smaller than Curiosity's landing target of 15.5 x 12.4 miles. Thanks to the data it captured in February, the next probe will land in a space 30 percent smaller.

What happened next is even more impressive. As the parachute opened, Perseverance’s radar measured its altitude. With the heatshield gone, the rover's cameras could scan the ground. On-board pattern recognition picked out features and looked for the landing spot

When it slowed down to 200mph, the parachute cut loose, and the rover’s rockets took over, slowing it right down. At this point the lander vision system (LVS) took over, using “terrain relative navigation” (TRN) to match the rover’s camera images to a map of the terrain, and guide it to a smooth landing on the jumbled terrain of Jezero Crater.

The system was tested as much as possible, with helicopters and suborbital rockets on Earth but, for obvious reasons, could not do a full live test till the day of the actual descent.

On the day, when she was the public face of NASA, calling out the telemetry, she said: “ it wasn't until after I called 'touchdown confirmed' and people started cheering that I realized, 'oh my gosh, we actually did this. We are actually on Mars. This is not a practice run. This is the real thing'."

Jezero is the hardest landing site NASA has chosen for any Mars mission, and it picked it for a reason. Perseverance touched down in an ancient river delta that fed a lake that filled the crater three billion years ago.

It will also drill out and cache interesting rocks for recovery by a later mission. That mission will require whole new techniques, but is due to launch in 2026.

Perseverance will also carry out a key test for possible manned Mars missions in future: testing the production of oxygen from the Martian atmosphere.

All this work will be done more or less autonomously, with high level instructions from Earth bringing back a payload of scientific data.

It really is the farthest Edge computing has ever gone, and embodies several extremes: low data rates, unreliable links, and a “right-sized” processor and memory architecture. It also has absolutely zero chance of any human maintenance and support visits.

Compared to the tight budgets of Perseverance, Earth-bound Edge systems have an embarrassment of riches, with 5G networks, mains electricity and the possibility that someone might come by and reboot them.

While NASA leads scientists round the world in learning from this Mars mission, digital infrastructure builders will be able to learn a lot about the limits of Edge computing.

Perseverance communicates back to Earth by relaying signals via Mars orbiters, including the Mars Reconnaissance Orbiter, which has been orbiting Mars since 2006, and became a full time relay system in 2010.

For the leg from Mars orbit to Earth, the interplanetary Internet connection uses a store-and forward-network, designed to deal with frequent errors and disconnects, long delays which can also vary by a huge amount.

Given the light weight of interplanetary craft and their low power budget, communications systems are pretty asymmetrical. Big antennas on Earth are needed to pick up the whispers from Mars, and they must be trained and adjusted to catch signals from pre-arranged directions.

Data is carried by packets defined by the Consultative Committee for Space Data Systems (CCSDS) telemetry standard. Each packet carries a variable amount of data, from 7 to 65,542 bytes, including the packet header. Error correction is also included.

The rover is controlled by a chip that’s been in circulation for more than 20 years: the Power PC 750 processor, which also saw service in the vintage Apple iMacs launched in 1998.

It’s not a cutting-edge processor: it's got only 10.4 million transistors, about a thousand times fewer than a smartphone chip. And, while it can run at 233MHz, Perseverance is only operating at 133MHz.

There’s a reason for this apparently low spec. It’s a ruggedized version of the processor, costing $20,000 and built under license by BAE Systems into the RAD750 single board computer, retooled from the ground up with radiation protection and error correction logic to repair any damage to data in the memory, because a single cosmic ray could fry an unshielded computer.

James LaRosa at BAE Systems told New Scientist: “You have this multi-billion-dollar spacecraft going out to Mars. If it has a hiccup, you’re going to lose the mission. A charged particle that’s racing through the galaxy can pass through a device and wreak havoc.”

Perseverance has three computers on board, each with two gigabytes of flash memory (about as much as a small USB stick) and 256 megabytes of RAM. One takes care of the rover’s main functions, one analyzes navigation images, and the third one is a backup.

The Mars Rover has the following equipment: