The history of Old Billingsgate

No one is sure how the market got its name, with earlier versions including Blynesgate and Byllynsgate. Perhaps the name comes from a water gate at the south side of the City where goods came in, thought to have been owned by a man named ‘Biling,’ or perhaps the name came from King Belin, who ruled 400 years before the Common Era.

But Billingsgate, as it became known, grew with London, becoming an integral part of its culture and existence. In 1327, Edward III signed a charter that prohibited the setting up of rival markets within 6.6 miles of the City of London, a distance chosen as the reasonable length a person could be expected to walk to market, sell their produce and return in a single day.

Roughly 80 years later, King Henry IV granted the right for citizens to collect tolls and customs at Billingsgate, Cheap and Smithfield. The market sold everything: Corn, coal, iron, wine, salt, pottery, and whatever else people could trade, before becoming increasingly associated with fish as the 16th century dawned. 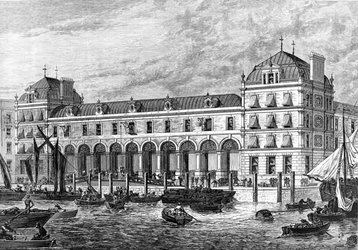 An Act of Parliament was passed in 1699 making Billingsgate “a free and open market for all sorts of fish whatsoever,” with the sole exception being the sale of eels, which was restricted to Dutch fishermen moored in the River Thames. They were granted this privilege due to their help feeding the people of London during the Great Fire of 1666.

As the market grew in import, it became clear that the sheds and stalls crammed around the dock at Billingsgate were insufficient to handle the level of demand. In 1850, the first Billingsgate Market building was constructed on Lower Thames Street by the builder John Jay, but it soon proved too small as well.

In 1873, the structure was demolished and replaced by the building that stands today – designed by Sir Horace Jones, an architect perhaps best known for creating Tower Bridge. Business boomed until 1982, when the fish market moved to the Isle of Dogs.

The architect Richard Rogers was brought in to refurbish the building now known as ‘Old’ Billingsgate, and turn it into a disaster recovery site for a major bank. Then the trouble started. 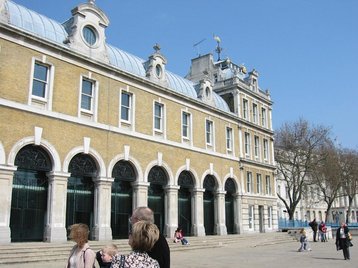 In a time of increasing terrorism from the IRA, banks were eager to set up recovery areas in case of an attack. Billingsgate was chosen as one such site, but it had crucial structural flaws.

The ground floor was converted into a backup trading floor, with the basement set to have UPSs, switch gear and a generator installed for disaster recovery. “But when they came to the basement they saw that it had a big pit in it - the ice pit,” said Professor Ian Bitterlin. At the time, Bitterlin worked as a critical facilities engineer at Anton Piller, with the bank as one of his customers.

“For over 100 years, that was filled with ice. That’s where they dumped the fresh deliveries, that’s where they took the ice out to pack all the fish in when it came off the boats.

“What no one had realized was that for a hundred years, the ice had kept the walls at virtually zero, and the Thames, when the tide is in, is much higher than that pit. So, literally, the ground that surrounded the pit was in a state of permafrost, and that wouldn’t allow the salt water to get into the basement, because the frozen ground actually acted as a barrier for the water, and they had terrible trouble with it at every turn.”

He added: “Every week more water would arrive in the basement as the ground thawed out. So, in the end, they had to pack it - they changed the whole thing.”

John Laban, who worked at BT at the time helping to connect the trading floor, said: “I can remember them talking a lot about this in the planning meetings, about what happens when the permafrost melts. ‘Will the building fall down?’ It was a really significant problem.”

Mike Foskett, who once ran Morgan Stanley’s mission-critical data centers, explained that the permafrost issue could have been anticipated, but it wasn’t: “That’s the major problem. We never learn.” Bitterlin agreed: “Disaster recovery is more a disaster than a recovery.”

And so, Laban said, the recovery site “just sat there for years, until eventually it was purchased for a conference center and they took out all the infrastructure. Now it’s just a big empty space upstairs and downstairs.”

Old Billingsgate is the venue of DCD Zettastructure, an exclusive, end-user focused event that tackles head-on the challenges of provisioning digital infrastructure for the Zettabyte Era. More information here.