How will the infrastructure demands of future industries be met?

IDC predict that, by 2025, 49 percent of the world’s stored data will be in public cloud environments with data generation dominated by ‘future industries’ 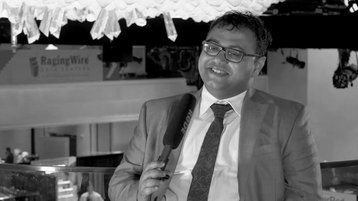 Ahead of DCD>San Francisco, Dr. Suvojit Ghosh, Co-founder & Managing Director of the Computing Infrastructure Research Centre (CIRC) at McMaster University, sat down for a Q&A with DCD’s Kisandka Moses, who is producing this year’s conference. They discussed the infrastructure required to support the growth of future industries, from the life sciences and healthcare, next-gen transportation and global internet sectors

Q: The event in San Francisco is really built on the fact that future industries are coming. In fact, they're already here. The likes of Uber represent next-generation transportation, while companies like Omada Health represent the future of healthcare. A lot of these future industries and companies that we thought were far off are closer to reality and operation than we thought.

One of the key themes we are looking at is the infrastructure that they will need to power their exponential growth as they as they get larger and larger until it makes economic sense to begin investing in proprietary data centers. With these industries having no need for legacy infrastructure, do you think that the hyperscalers and colocation providers that will be housing their data are adequately prepared to bear the brunt of the infrastructure demands that they will have going forward?

A: That's an excellent question. Yes, in the sense that the hyperscalers, and the big colocation companies have done a pretty good job so far at scaling facilities and having cost effective facilities at scale. However, the model so far has basically been a warehouse-scale model. So you have one huge data center that houses workloads stuff, and everybody has to connect in there. Now, some of the emerging workloads, especially with Uber, self driving, and with healthcare, as it relates to real time diagnostics, from wearable devices and such, or even some of the work we're doing with in-home care for elderly people entails very low latency access to lots and lots of compute. You have a lot of data that needs to be quickly sent to a data center, processed there and from the processing, some actionable outcome needs to come back to the site of the data as soon as possible.

For instance, having a cloud model where there's 10-20 millisecond latency in a big warehouse data center is not going to be feasible to support these workloads.

We're going to see smaller data centers that are located closer and closer to the users. To my knowledge, there are only two business models that are active in [pushing] edge data centers. One is owning your own infrastructure, putting it close to the user as when you need to power an application which nobody else has, you need to build your own infrastructure. The second business model is the colocation model for edge, which has evolved, especially in the US. With the evolution of 5G, it empowers wireless service providers because a lot of this compute can now be housed at the base of the cell tower.

What used to be humongous data centers located all over the world will now become millions of data centers.

At DCD>Dallas, we're going to have a conversation based on whether the 'edge' needs more facilities or whether centralized data centers will be powerful enough to support the snappy, 5G-enabled applications that will come online shortly. Additionally we'll look at whether milliseconds of latency actually matter when the social media giants are increasingly responsible for enterprise interconnect and connectivity more generally. What are your thoughts on this?

The individuals who are arguing that milliseconds 'do not matter' will be attributing that line of debate to legacy applications, applications we can conceive of today, for instance, social media, email or even regular consumer banking transactions. But latency can’t support emerging applications.

If we think about some of the first applications of edge, such as an oil pipeline which extracts crude oil from various mines to a central place where it's stored and transported to a refinery. These pipelines now have tons of sensors and the sensor-generated data is processed in real-time to open or closed valves needed to balance the pressure inside that system. This decision needs to be made within a split second. The data generated from 100 sensors to a computer that is capable of crunching these numbers really quickly and sending back a decision to that valve and as such an application of this type will depend on low latency.

In the industrial IoT world, they're using edge a lot right now, especially in heavy industries like car and electronics manufacturing. They have to have on-premise equipment, they cannot send the data to a cloud and wait for response. There needs to be compute that sits very, very close to the user. This is also the case with connected vehicles as the core benefit is the vehicle being able to communicate with other vehicles whilst on the road and the road infrastructure where there is coordination required. When all cars go autonomous, the decisions about which car gets priority will need to happen in less than a millisecond and that compute has to be at the cell tower, not a hop away or three hops away.

You've spoken quite a bit on liquid cooling, where you think that trend is going and the fact that it's pretty much inevitable in terms of the densities are coming of age in data centers today. Do you draw any sort of distinction between where you think the on-boarding of direct-to-chip cooling will come of age versus immersion cooling?

I don't think there would be one standard cooling method, the route chosen will be very application specific. What we would probably end up seeing is the hyperscalers and large wholesale colocation providers moving towards immersion as it's easier to maintain when it's centralized. Whereas when you're moving closer and closer towards the edge, and you have a single rack or a half rack, immersion will be very difficult to maintain because it requires a lot more maintenance than direct-to-chip. In unmanned locations or small 'edge' sites, you're more likely to see use of direct-to-chip.

Next, I'd like to hone in on sustainable computing. This is a very big theme that we're looking at for DCD>San Francisco this year. The wider conversation has centered on the exponential growth of data centers and the sector drawing on so much of the world's energy is beginning to permeate across the industry. It would be great to get your perspective on what we can do better as an industry to be more sustainable? As part of the research you have led on, are there any overarching methods or concepts you're encouraging the owner-operators which you come into contact with to explore?

I would say the number one method is adopting liquid cooling in some way, shape, or form as it drastically cuts power consumption and cost. Adopting liquid cooling can cut down power consumption by 30 - 50 percent. The second biggest route to cutting down power usage would be use the right kind of silicon. For instance, depending on what kind of workload you're using, do you need CPUs or do you need GPUs? GPUs are fantastic at number crunching but CPUs are essential for logic. So having the right blend of infrastructure is pivotal. The examples I have provided are rooted in hardware configuration and essentially 'low hanging fruit.' There are a ton of routes to energy efficiency on the software end.

We're doing some work in the area of intelligent workload assignment where you can use software to shift workloads around using virtualization, which can assist with compress workloads so you are always hitting the highest point in efficiency of workloads. We've been able to demonstrate that versus random or uniform distribution of work, you can cut down power cost by 30 percent.

We want to end the Q&A on a fun note, did you have a computing hero growing up? If not, are there any technology leaders who inspire your journey to innovate in this sphere?

A: From the world right now, I look a lot at Elon Musk. I like how uninhibited he is at introducing completely new concepts. He’s doing what most sane people would say are crazy things. He overcomes a lot of legacy hangups which we are experiencing in our industry. For instance, air cooling costs us a lot in capital and operating expenditures. We're in need of an Elon Musk in the data center world who can be radical and say 'hey, we're just going to do this new kind of computing infrastructure from now on'.

Dr. Ghosh will join us at DCD>San Francisco on 11-12 July, to speak on the plenary panel "Dear Future Industries, what infrastructure will you need to power your exponential growth?"