Power and water: How can data centers be made genuinely sustainable?

Data centers are made from concrete, cement, steel and glass, and consume vast amounts of power. So how can operators genuinely become “sustainable”, let alone achieve net-zero?

The growing issues regarding data center power usage are well know and have even led to moratoriums on new facilities in a number of key markets, not to mention rising political pressure for action. But following a hot summer across swathes of the northern hemisphere, a growing clamor of voices are beginning to warn about data center water usage, too. 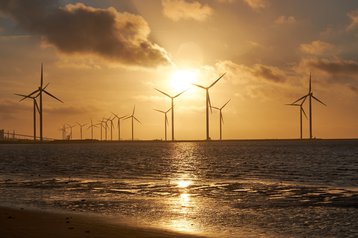 The issue was blown into the open in August with the news that Thames Water, the water company responsible for supplying not only for the City of London, but also the power-pinched data center location of Slough, had instigated an investigation into data center water usage following the hottest English summer since 1976.

Back then, ordinary households had ‘hosepipe bans’ imposed and some neighborhoods were reduced to queueing up to get their water from standpipes in the streets. And no-one in England wants to return to that scenario should next summer prove equally clement.

But focusing on improvements to data center cooling systems could help solve both the power and water usage issues, believes Patrick Quirk, chief technology officer at Nautilus, while slashing carbon emissions, too.

“The single most inefficient part of the data center is the cooling environment: how do you remove the bulk heat that’s being generated by the IT gear? The primary improvements to PUE [power usage efficiency] have been the development of direct and indirect evaporative cooling. If the data center is somewhere where the temperature is lower, you might just use free air cooling – fans to bring cooler air in,” he says.

We can either be on the water on a floating platform – essentially, a floating data center – or, we can be on the land, but near the water Patrick Quirk, Nautilus

However, free air cooling in most locations can’t be used all-year round, so expensive cooling equipment still needs to be installed and used during those times that the climate won’t cooperate. “During summer, you've got to run compressors and everything else, so your PUE is going to climb up from, say, 1.2 to the 1.5-1.6 range. So, the problem with that is then you’re using the most energy at the point where the utility grid is going to be most stressed,” he says.

“The other big advance was the development of direct and indirect evaporative cooling, where you basically have a water wall, and you're blowing fan air through that water.

“The downside is that it consumes thousands of liters of potable water per hour. And then, after that, the water that hasn’t evaporated has to be sent back to a water treatment plant with chemicals to remove things like lead, prevent Legionnaires disease and so on. So, there are big trade-offs involved in terms of efficiency and water usage,” says Quirk.

On top of that, there are a number of sustainability and other costs that aren’t fully taken into account, such as the cost of pumping the water from its source to the data center, and the treatment of the wastewater at the back end. This, therefore, helps to flatter the data center’s PUE.

However, the hot summer and consequent droughts across much of Europe has put water usage back under the spotlight. 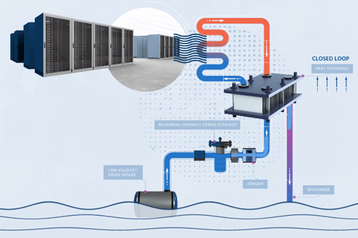 Nautilus specializes in data center water cooling technology that can use natural cold water from lakes and rivers – indeed, any body of water – to keep server racks cool. As a result, Nautilus’s cooling processes do not require or extract potable water, don’t use chemicals and its extraction process causes no harm to wildlife. After usage, the water is returned to its source at only a slightly raised temperature, with no further treatment required.

By taking water for data center cooling direct from a sustainable water source – and returning it there just seconds later – cooling is not only more cost-effective, it’s also, well, more sustainable.

“We take water at whatever the temperature of the water is at its base, as long as it's less than about 80 degrees Fahrenheit or 25 degrees Celsius. Then we return it back at between two and two and a half degrees higher,” says Quirk.

The water is not used for long. “We'll hold on to it for about 12 to 15 seconds. We have a low-pressure intake system that prevents fish entrainment, so fish and larvae can swim right by and they won't get pulled in. We then ionize the water so that both the water, and any materials that did get through, are negatively charged and won’t adhere to anything.”

Internally, Nautilus uses inert materials – either high density polyethylene (HDPE) or stainless steel – so that everything that the water flows through remains clean.

Across the open loop cycle, the water that is flushed back to its source is no more than a slightly more oxygenated, slightly cleaner version of what came in, adds Quirk.

What this also means, of course, is that Nautilus data centers require a water source from which to draw for cooling and, hence, enables data centers to be sited in places beyond the usual big cities.

“We can either be on the water on a floating platform – essentially, a floating data center – or, we can be on the land, but near the water,” says Quirk.

Indeed, a Nautilus data center only needs to be within about a kilometer of the body of water that it would be utilizing for cooling. Furthermore, while it would look like a traditional data center, it has a much smaller footprint as a result of the savings in cooling equipment, combined with a data center design that enables power distribution equipment to be installed on the first level above the data hall. 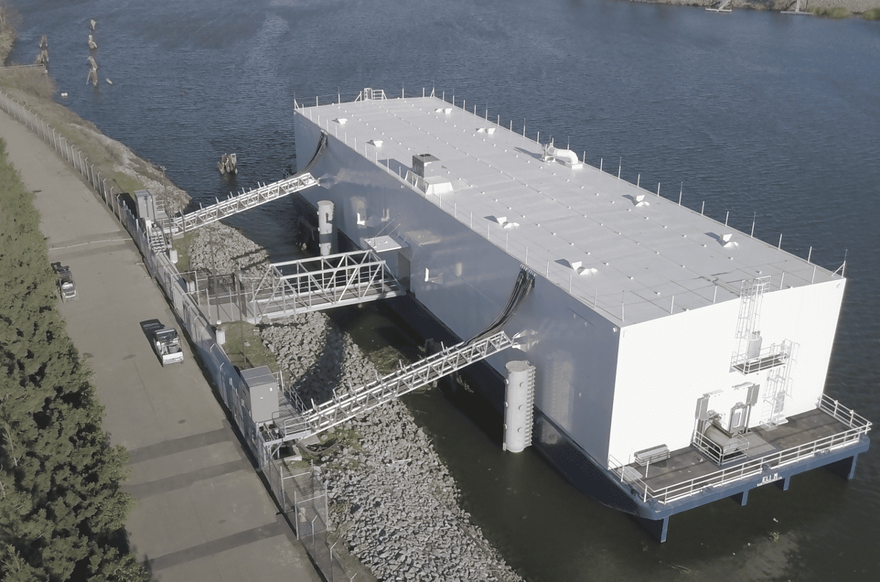 The water and cooling, meanwhile, goes in adjacent corridors. “That is brought in under pressure and taken through a heat exchanger. What sits above the data hall is not under pressure, though. Instead, we run it under vacuum, pulling the water for cooling around the data hall,” says Quirk. As a result, were there to be a leak at any point, water would simply be sucked out, rather than drip-drip-dripping over valuable IT equipment.

As a result of these design innovations, according to Quirk, Nautilus offers at least a 50 percent improvement in terms of total land footprint compared to conventional designs.

“On top of that, we take a very simple, modular approach to construction: the usual footings and concrete bases, post and beam, with our modules set down on top of the beams. Then we wrap the building in whatever way the client wants,” he says.

As a result of Nautilus’s approach, the building doesn’t require large and noisy chillers bolted to the outside, which represents another environmental ‘win’. “Our data centers are significantly quieter, both on the outside and on the inside, than a traditional data center,” adds Quirk.

While Nautilus is a relatively young company, its technology is proven through it’s data center in Stockton, California. It also has a number of other projects also on the go.

Stockton was Nautilus’s first facility. It has a modest critical load of 7MW and a PUE of 1.15. Part of the purpose of the build was to demonstrate that an ultra-sustainable facility could be built close to Silicon Valley to the strictest environmental standards.

Millinocket’s data center site is available for up to a 60MW data center. It won’t just make full use of Nautilus’s cooling technology, but it is also 100 percent powered by hydroelectric power. That means no carbon emissions, no refrigerants, or chemicals in the cooling process and zero net water consumption. Its PUE weighs in a 1.1 all year round, putting the kind of power efficiency that only the biggest technology companies can normally afford into the hands of ordinary operators.

Together, the facilities demonstrate not only that the Nautilus technology is fully scalable to hyperscale levels of service, but can also scale down for organizations and data center operators with much smaller IT needs.

Millinocket, in particular, demonstrates that not only does a data center operator not need scores of PPAs with wind and solar farms, sometimes hundreds of miles away, but that with more innovative design it can slash water and power consumption, too.

To find out more about 100 per cent sustainable data center technology, check out www.nautilusdt.com