Content delivery network Akamai has announced a plan to source renewable energy for half its global operations, thereby ensuring its carbon emissions in 2020 will be lower than those in 2015. The company says its approach could be a model for others running a distributed network.

Moving to renewable energy is tricky for distrtibuted resources like Akamai’s, as the company owns no data centers, and has all its hardware in colocation facilities at the “edge” of the network close to end users. It buys its electricity indirectly through those service providers, but it has found a contract which allows it to pay for renewable energy, funding the development of renewable resources in the markets it serves. according to a blog by Nicola Peill-Moelter, Akamai’s director of sustainability. 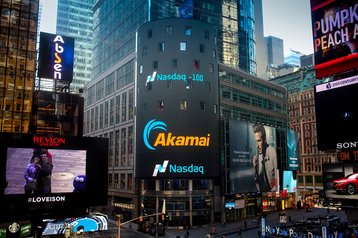 “With hundreds of thousands of servers humming away in more than 126 countries and thousands of locations, our network operations are responsible for 93 percent of our electricity-related Scope 2 and Scope 3 greenhouse gas (GHG) emissions,” said Peill-Moelter.

The company has been careful to buy energy efficient hardware, and Peill-Moelter says the company’s greenhouse emissions and energy user are growing much slower than the network traffic it handles . Over the last seven years, the network traffic has gone up 20-fold, but energy use has only increased by one-tenth of that (see graph). But the network can’t go to zero energy, so decarbonizing has become a priority, she said.

Peill-Moelter says that going green is “anticipating the market trend”, as Fortune 5000 companies are starting to ask for decarbonized energy as a differentiating feature.

Given Akamai runs a distributed network, in other people’s premises, the company was always going to have to use some sort of indirect mechanism to pay for renewable energy that would offset the power it actually uses. ”We don’t own any facilities and already pay the landlords for our electricity,” said Peill-Moelter. “Solar panels on roofs and wind-farm power purchase agreements for our individual facilities are not options for us.” 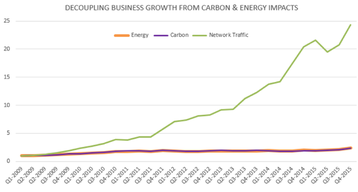 Akamai wanted to invest in “putting more renewable energy electrons on the grid,” and wanted them ”co-located in the same power market as our operations, so we are adding renewable electrons to the same grid from which our operations draw electrons,” she said.

But the company doesn’t have the option for the kind of large-scale power purchase agreements, by which organizations like Google and Apple fund entire wind farms,

Its procurement strategy is based on long-term “contracts for differences (CFDs)” with renewable energy project developers in each market where it operates. Akamai will be a long-term energy “off-taker”, committing to buy renewable energy at a fixed “strike” price. Backed by this commitment, the developer can then get funding for the project, generate electricity to match a proportion of Akamai’s annual energy usage in that power market. When the project is up and running, the electricity it makes is actually sold into the wholesale market, and Akamai makes up the difference between the strike price and the market price, or takes a profit if pricesare higher. At that point, any renewable energy credits (RECs) are retired.

This is a long term program, so Akamai expects to be half-decarbonized in about four years (by 2020), compared with webscale providers with centralized facilities who able to shoot 100 percent renewable energy use.  However, it could be used by similar operators, said Peill-Moelter: ”It is our hope that our procurement strategy can be a model for other companies with similar small-scale, distributed operations. We also endeavor to expand our impact through industry collaborations.”

It is difficult though because Akamai has to operate in some regions where renewables are less developed. At the moment countries like Australia and India have more carbon-intensive electricity, she said: ”But we believe that there will soon be similar opportunities for renewables procurement outside the US, so we can begin to globalize our impact and accelerate decarbonization.”

The commitment to decarbonizing is a new thing for Akamai, but it’s had an environmental strategy for some time. In 2012, Peill-Moelter said Akamai would “adopt renewable energy options which made sense”. A year ago, Akamai’s director of network architecture Kristian Kaufmann told us that, while the company looks for efficient equipment, for a content delivery network, “performance is probably more important than power efficiency optimization”.

“No one said this would be easy, or that we would have all the answers at the start,” said Peill-Moelter in her blog. ”That’s why it’s called a commitment. That’s why this needs to be a global, collaborative effort.”