Fujitsu says data centers could be powered by ammonia. But first, the company is working to make a cleaner method to manufacture the caustic gas.

The Japanese giant has been working with Icelandic startup Atmonia since April to try and find better catalysts for a green production process. One reason for this is that Fujitsu wants green hydrogen to power its own data centers and those it operates for customers, according to a report. 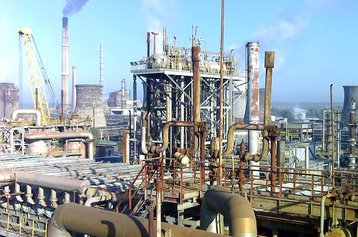 Ammonia is vitally important for agricultural fertilizers, but could also be used as an energy store. Ammonia molecules contain nitrogen and hydrogen and can be "burnt" for energy, either by separating the hydrogen off, or by using the ammonia directly in a solid oxide fuel cell. It is easier to transport than hydrogen, given its larger molecules.

However, burning ammonia won't help climate change, unless the ammonia can be produced without itself creating emissions. Current ammonia production generates a vast amount of carbon dioxide - amounting to around 1.8 percent of the world's greenhouse gas emissions.

This is because ammonia is usually produced by the Haber-Bosch process, which involves reacting hydrogen and nitrogen together. This requires energy, but also the hydrogen is currently normally produced using fossil fuels. So-called "brown hydrogen" results in "brown ammonia" with a heavy carbon footprint.

The problem with green ammonia is that the Haber-Bosch process needs to operate continuously, so it has to have a continuous supply of hydrogen. Green hydrogen is only produced intermittently when renewable electricity is available.

Fujitsu is using AI to do quantum chemical simulations, using its Arm-based Fugaku supercomputer to search for possible catalysts to allow a different production process.

"Retrofitting the industrial process to use hydrogen sourced from electrolysis of water is possible," said the April announcement. "However, this is a more energy intensive route and does not fit well with the intermittent nature of renewable sourced electricity (such as solar/wind) as the Haber-Bosch process requires a continuous source of hydrogen to maintain operation of the downstream processes, which in turn requires uninterrupted source of electricity."

To answer this, Atmonia is looking for a method to produce ammonia by only using "protons from water and nitrogen from air".

There's no immediate result from that search, but this week, Fujitsu mentioned that it hopes the eventual Atmonia process will allow a self-contained ammonia energy plant the size of a shipping container, which could be used to power data centers.

"Fujitsu, as you can imagine, operates data centers all over the world to power our own internal businesses. And we also run data centers on behalf of our customers," Fujitsu Research senior director Surya Josyula, told the Register

"So what we are currently researching is, once we have green ammonia produced, how can we power our data centers and use that as a backup power source or even a primary power source?"