Last week, Angkasa-X and USM held a groundbreaking ceremony for the Angkasa-X Earth Station and Space Technology Centre at the USM Engineering Campus, Nibong Tebal, Penang. The project will see around RM30 million ($6.8m) invested and is expected to be completed by the end of this year. 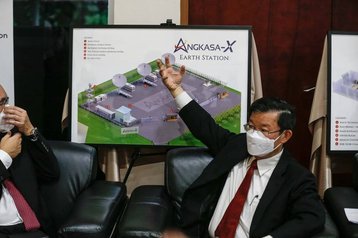 Specifications of the facility – including the on-site data center – haven’t been shared, but renderings from the ceremony suggest three dishes are planned for the site.

Angkasa-X executive chairman Sean Seah said they are building both the earth station and space technology center concurrently so that they could produce Malaysian-designed and Malaysian-made satellites to be launched into space from next year onwards.

“The completion date for the ground station is by the end of this year, hopefully by October or November and the space technology center is expected to complete about the same time,” he said “When the assembly line is ready, it has the capabilities to assemble four nano-satellites concurrently and we will be launching two constellations of satellites first,” Seah said.

Angkasa-X, which counts Green Pro Capital Group amongst its investors, plans to launch about 500 ASEAN-focused satellites in total. The first constellation of satellites will be more focused on remote sensing; around 24 satellites will be launched over the next two to four years. From 2024 onwards, the company is aiming to launch communication satellites that will be built using some American technology.

USM, via the School of Aerospace Engineering, and Angkasa-X signed an agreement to locate the center on a 2-acre area at the USM Engineering Campus. in April 2021. The facility will be used for research and development (R&D), and assembly, integration and testing (AIT) of Low-Earth-Orbit (LEO) satellites to form and operate the Angkasa-X A-SEANSAT LEO satellite constellations.