Mining company Anglo American has consolidated two of its data centers at its Minas-Rio iron ore operations in Brazil into a single hyper-convergence environment.

Anglo American consolidated servers, storage systems, and switches at its two facilities – located either side of its pipeline at Conceição da Mata Dentro in Minas Gerais state and the port of São João da Barr in Rio de Janeiro – utilizing Dell EMC VxRail, which the company uses for its private cloud. The management of all elements of the two data centers is now carried out from a single point of monitoring and control.

These mines are bitcoin free 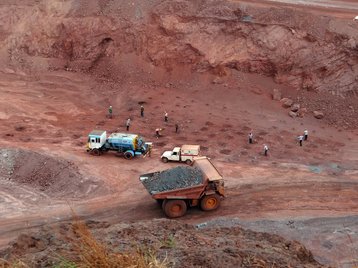 An iron ore mine – Bishnu Sarangi/Pixabay

The data centers were used to monitor the production system of the mines and process laboratory data about the ore’s compliance with customer specifications. Anglo American was looking for an environment that could handle heterogeneous processing periods – with peaks and low demand – and unify management of data center components, the companies said. After the evaluation process, the project was developed and the system was implemented in eight months and developed by Dell in partnership with local IT consultancy Portnet.

“These two data centers are extremely critical, receiving and processing data produced throughout the entire iron ore extraction chain, from the pressure of the pumps, volume in the ore pipelines, to the life of the equipment and trucks and finally, details of the shipping of the ore at the port. Applications running in these data centers perform predictive analysis and generate alerts in case of possible problems,” said Clebecy Santana, Industrial IT Coordinator at Anglo American.

“With the adoption of hyperconvergence, all information from the sensors is now consolidated on centrally managed servers, in a fail-safe structure with data replication on both sites. Applications running in these data centers perform predictive analysis and generate alerts in case of possible problems."