Baidu partners with AMD on GPU software; Tencent and JD get Epyc

A good day to be AMD

The partnership was announced after AMD separately revealed that its latest Epyc CPU would be adopted by two other Chinese tech goliaths - Tencent and JD.com. 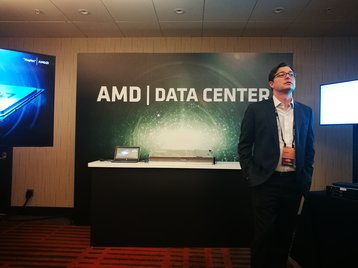 “AMD is the only company with the capability to deliver both the high-performance GPUs and CPUs required to power the next generation of cloud data centers,” Forrest Norrod, AMD’s senior VP and GM, said.

“Together, AMD and Baidu will leverage the two companies’ world-class technology and software engineering capabilities to create a comprehensive and open ecosystem to address the growing demand for data center workloads and provide more intelligent human-computer interaction.”

Liu Chao, senior director at Baidu’s System Technologies Department, added:  “We are delighted to work with AMD to introduce AMD Radeon Instinct products into our data center and AI program, to build a more flexible and powerful computing platform that empowers AI products and accelerates the development of the global industry.”

Specifics on the scale of Baidu’s deployment of MI25, MI8 and MI6 accelerators were not given, with the company also using Nvidia GPUs in its data centers to deliver artificial intelligence-based products such as conversation app DuerOS and self-driving car initiative Apollo.

Sage Zou, senior director of Tencent Cloud, said: “By the end of this year, Tencent Cloud will launch AMD Epyc-based 2P cloud servers, with up to 64 processor cores and superior single system computing capability, to provide the industry with a more diverse portfolio of cloud products and services.”

Andrew Wang, technology leader of the hardware system department at JD.com, focused on the cost savings of the Epyc product family: “AMD Epyc will help JD.com improve the total cost of ownership (TCO) of our server systems.

“JD.com will collaborate with AMD on Big Data, AI and Cloud Services based on AMD Epyc in the future.”

For more on AMD’s Epyc chip, and the company’s journey out of the wilderness to become a viable x86 challenger, be sure to read the latest issue of DCD Magazine.