Quantum computing company D-Wave Systems has established a Washington-based subsidiary to sell its products to the US government.

‘D-Wave Government Inc’ will have an independent board consisting of executives with “deep experience at US government agencies.” 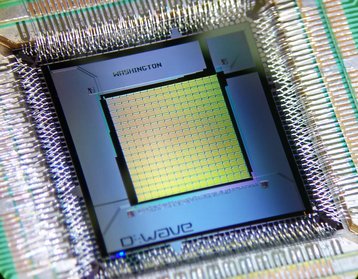 While D-Wave calls itself ‘the world’s first quantum computing company,’ others have questioned the veracity of such a statement, with the debate focusing on the quality of D-Wave’s quantum bits.

Classical computers use bits that are either in the state of 0 or 1, but quantum bits (qubits) can be in the state of 0, 1 or both (known as superposition). The quantum computers can therefore take advantage of the significantly greater number of possible states.

But, while D-Wave markets computers with 1,000 qubits for around $10-15 million, and plans to introduce a 2,000 qubit machine, some experts are not convinced they represent a true quantum computer.

John Morton, a professor of quantum computing at University College London, told Bloomberg that, with a version of the D-Wave system he saw, its qubits only remained in a quantum state for about 10 nanoseconds, not enough time to solve a very complex equation. Entanglement - where qubits function collectively - also appeared to be limited.

And yet, few dispute the achievements of the Canadian company, which has sold systems to Google, NASA, the Los Alamos National Laboratory, and defense contractor Lockheed Martin. The system has also been rented by the Pentagon for R&D experiments, and one of its investors includes In-Q-Tel, a venture firm funded by the US Central Intelligence Agency.

The company may not have built a true quantum machine just yet, but its computer has attracted attention of the US government and its affiliates, with this latest move aimed at furthering sales to the US.

The board appointees, listed in full below, includes numerous ex-government officials, including senior appointees at the NSA, the Navy, Air Force, and the CIA.

The board chair, Jeffrey K. Harris, previously worked at Lockheed Martin, while the president of D-Wave Government, René Copeland, was behind the sales of various HPC platforms to the US government.

“We are truly honored that such an experienced and distinguished group of people have agreed to serve on the board of our D-Wave Government business,” Robert ’Bo’ Ewald, President of D-Wave International, said.

“As the only company bringing quantum computing to the real world today, we can enable solutions to the most complex technical, national defense and scientific problems that governments face. Our new organization and the board’s guidance and support will be instrumental in helping us address those needs.”

He told Defense News: “The US government is the largest procurer of computers on the planet. They also are the ones who typically apply technologies before others do for programmatic needs, whether it be the Pentagon programs or Department of Energy or the intelligence community.”

“I don’t have an exact dollar figure [for potential business], but I can imagine that as this business really gets rolling that there will be several of these big systems within the DoD, the DoE labs, the intelligence community networks. Whether they lease them, purchase them or are using a cloud service, it’s too early to tell yet.”

The intelligence community, which has spent untold sums on large data centers to store metadata, is sure to be of particular interest to D-Wave. In a video promoting the company, it says that quantum computing is “a tool that can solve problems that you could never otherwise solve [such as] looking for bad guys in large amounts of data.”

Leaked NSA documents from Edward Snowden (via The Intercept) revealed that there was internal consternation over bulk surveillance, as the sheer amount of data led to ‘analysis paralysis’.

One document from 2011 said: “Our costs associated with this information overload are not only financial, such as the need to build data warehouses large enough to store the mountain of data that arrives at our doorstep each day, but also include the more intangible costs of too much data to review, process, translate, and report.”

A system that could effectively search through large scale data sets would be of obvious use to the Agency, while true quantum computers are expected to have a profound effect on cybersecurity and cryptography.

There are other companies rushing into the quantum computing field. Google has confirmed it is working on its own quantum computing project, in 2014 hiring the University of California’s John Martinis to lead a project to design its own superconducting qubits that aim to beat D-Wave.

“His qubits are way higher quality,” Scott Aaronson at the University of Texas at Austin told the New Scientist, which also cited sources that said the search giant is getting close to revealing a 50 qubit quantum computer that could best the world’s most powerful supercomputers at certain problems. It may be revealed as soon as the end of 2017.

Harris served as the Director of the National Reconnaissance Office and Assistant Secretary of the Air Force. He is the chairman of the U.S. Geospatial Intelligence Foundation, and serves on other boards and panels.

In the past, Copeland led sales to the US government for SGI, Cray, Platform Computing and other firms.

Frances Fleisch - Was the Executive Director of the National Security Agency (NSA) and special advisor to the US Strategic Command. Fleisch earned the Presidential Rank Awards several times, as well as the National Intelligence Distinguished Service Medal over a career of more than 30 years in government.

Kerr is also the vice chairman of the MITRE Board of Trustees, a non-profit which operates federally funded research and development centers.

Vern Brownell - CEO of D-Wave Systems, which previously worked at infrastructure virtualization company Egenera, and was the CTO of Goldman Sachs.

V. Paul Lee - The current board chair of D-Wave Systems, and managing partner of venture capital firm Vanedge Capital. He was previously the president of Electronic Arts (EA), the publisher of such video games as Battlefield, FIFA and Madden.

Don Listwin - The director of D-Wave, and founder of the Canary Foundation, which specializes in early cancer detection. Previously held senior leaderships roles at Cisco Systems and CEO roles at Openwave Systems and Sana Security. He is a consulting professor at Stanford University.