California-based Dalrada is offering a containerized system with Iceotope liquid cooling, combined with its own heat pump and an absoption chiller, for sale in the US.

The system includes 84 Lenovo servers in a six-rack module. Thanks to the heat pump, provided by Dalrada's Likido subsidiary, the entire unit delivers 168 kW of cooling and 225 kW of heating for an input of only 56kW. The heat pump effectively cools the servers through the Iceotope liquid circuit and boosts the heat to export it in the form of water at 90ºC. 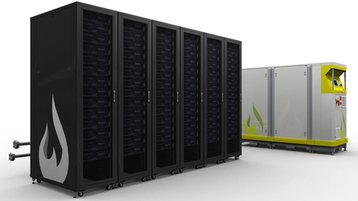 Dalrada promises to turn data center waste heat into high-grade heat in the form of 90ºC water, which can then be sold to district heating networks or used to generate further cooling. .

The news is illustrated with a picture of a Likido ONE heat pump, from energy harvesting company Likido, a Dalrada subsidiary. This product uses CO2 as a refrigerant, with a circuit that removes heat and boosts its temperature. Likido claims ts ONE has a coefficient of performance (COP) of 1.8, and 1kW of electrical energy results in an output of 8kW of thermal energy.

The combined Dalrado product will also use the LikidoAD, a scaled down aborption chiller newly-created for this project.

"Absorption chillers are a technology where you can use heat - in our case hot water at 90ºC - to provide cooling (COP 1:0.95) so 1kW of heat energy produces 0.95kW of cooling energy at 10oC to cool further IT servers," Likido Ltd CEO Stuart Cox explained in an email. .

"Absorption chillers use very little electrical energy, just a small pump," said Cox,. but they "need high grade heat of over 85ºC so this is why we must boost the recovered waste heat with a heat pump."  The LikadoONE heatpump boosts the Iceotope systems outlet water at 45ºC up to 90ºC.

As absorption chillers are normally very large, Likido created a smaller model, the LikidoAD, designed to complement the output of the LikidoONE.

"In a LikidoONE, we extract -120kW of cooling energy but can recover +160kW of waste heat for an electrical input of +40kW. We then use this waste heat (160kW) to produce a further -150 kW of additional cooling via LikidoAD for a very small electrical load increase."

The company produced a small-scale system which works with the six-rack Iceotope/Lenovo system, says Cox, because "liquid cooling is a relatively new technology so we feel that a six rack/ 160 server solution is highly attractivefor customers to test and deploy as a first stage - ie put their toes in the water. This solution would use 45kW of electricity to cool 260kW of IT load. That’s a Partial PUE of 1.17 or a DCiE of 85 percent."

If all goes well, Dalrada could serve a multi-MW data centerwith larger aborption chillers, said Cox, "from companies like Sanyo, Trane or Thermax. Multiple LikidoONE’s would feed into these large 5-8000kW machines."

"For AI and Edge computing applications, the combined technology is a game-changing solution, with the capacity to cool in silence, the highest power GPUs, and extreme rack densities, in the smallest space possible, without the need for large and costly purpose-built buildings with cold and hot aisles," says the Dalrada release.

The Iceotope Ku:l cooling system takes conventional air-cooled Lenovo servers and cools them in a system that is sealed from the surrounding atmosphere and does not need fans, and can operate in near-silence. The units can be located anywhere, Dalrada says, including harsh environments like mines or deserts, or in offices.

Brian Bonar, chairman & CEO of Dalrada, says: "We are very excited to collaborate with leading companies like Lenovo and Iceotope. A bonus is that the heat recovery and modular design is customizable, as a solution for a multitude of applications."

Dalrada will sell the combined system in the US and Puerto Rico.