Systems restored at DXC data center after a day

The Iowa Immunization Registry Information System (IRIS) was unavailable for most of a day, but has since been returned. Other states that used the DXC Mid Atlantic Data Center were also affected.

The outage did not delay any vaccine injections.

Thankfully, conspiracy theorists did not notice 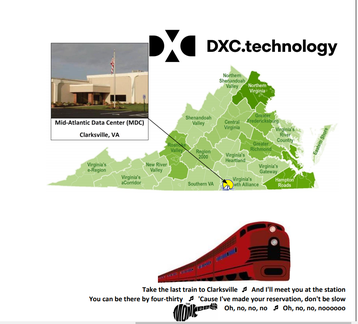 (Oh no no no! VITA, the song's usually believed to refer to Clarksville Tennessee) – Virginia Information Technologies Agency

"The data center for the Iowa Immunization Registry Information System (IRIS), the application used by providers to report Covid -19 vaccine administration information, experienced a brief hardware malfunction on March 16," the Iowa Department of Public Health (IDPH) said in a statement.

"For the duration of the outage, which affected Iowa and multiple other states, providers could not access IRIS to input vaccine administration information. This issue has now been resolved and all functionality has been restored."

The IDPH only identified the facility as the 'Mid Atlantic Data Center,' a broad name that covers several companies' sites. But a public IRIS Web Services Data Exchange Setup document confirms that it is using a data center owned by DXC.

Also used by the Virginia Information Technologies Agency (VITA), the DXC Mid-Atlantic Data Center is located in Clarksville, Virginia. The facility was originally built by EDS and hosted the Department of Homeland Security, before being bought by HP and expanded to host other government customers.

HP then split, with the data center going to HPE. That then split off its Enterprise Services division, merging it with CSC to form DXC, the site's current owner.

While the data center is used to host IRIS, the Iowa Department of Public Health has more broadly targeted moving to the cloud.

In 2017, the IDPH IT team were told they had less than eight months to leave an on-premises data center, and quickly shifted to Amazon Web Services.

It also runs Data Application Integration Solution for the Early Years (DAISEY) workloads out of a data center within the KU Price Computing Center, in Kansas.