New models take the the Li-ion UPS down to 500kW, and could support peak-shaving

The Galaxy VX series uses a modular design so power system redundancy and capacity can be scaled up using incremental 250kW cabinets. They also containt two input/output (I/O) cabinets, giving internal redundancy alongside the ability to scale. The modular architecture also makes the system more reliable and easier to repair. 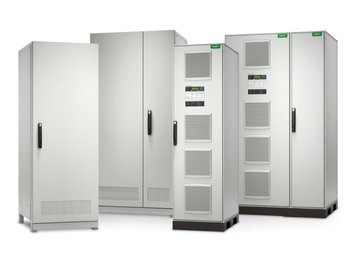 Data center operators are being encouraged to save energy during peak usage periods through demand reduction programs, in which they take their data center off the grid temporarily by opting to briefly run it from the UPS. However, the Energy Smart sessions within the DCD event heard that data center operators perceived a risk attached with such schemes.

Lithium ion technology make such schemes less risky and more attractive, says Schneider, as Li-ion-equipped UPSs will be able to charge and discharge more quickly, and also be more manageable. The new VX models will be more able to store renewable energy for use during peak periods so peak demands on the grid can be shaved, increasing the overall energy efficiency of the data center and the local grid, and recuding overall emissions.

DCD>Webscale takes place at Marriott Marquis San Francisco and will feature experts discussing digital infrastructure design for hyperscalers, Silicon Valley start-ups and everyone in between. This conference

will also feature the next of our EnergySmart series, an exclusive pre conference taking place on June 25. If you would like to join DCD>Webscale register here.