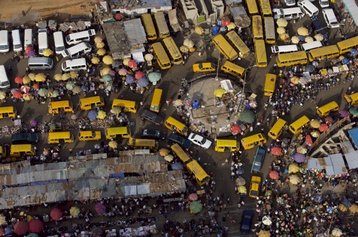 Medallion operates two data centers; one in Lagos and another in the capital city, Abuja. As part of the transaction, the joint venture is also acquiring a land parcel adjacent to the Lagos data center to provide near-term expansion capacity.

In a separate release announcing Q3 results, Digital Realty said it acquired a controlling interest in Medallion Communications through the JV for approximately $29 million.

Medallion's management team, led by CEO and co-founder Ike Nnamani, will continue to lead the business.

"There is a huge opportunity to both meet growing customer demand for connectivity in Africa and improve the internet infrastructure that serves over one billion people who don't yet have proper access to the benefits of the Internet,” said Digital Realty CEO A. William Stein. “The expansion of our platform announced today is a leap forward but it's just the start of our $500 million commitment to invest in the continent over the next decade. We see a huge opportunity to underpin Africa's expanding internet economy and play a central role in its growth."

In the same announcement, Digital Realty this week announced that iColo will enter Mozambique and is to develop a data center in the capital Maputo. The Q3 results said Digital Realty's existing joint venture with Pembani Remgro Infrastructure Fund, closed on the acquisition of a land parcel in the city during the third quarter for $3 million. DgtlInfra reports the land will allow iColo to build a 0.4MW, 3,900 sq ft facility.