Despite using AWS for its Disney+ streaming service

The Walt Disney Company is using HPE technology for its own internal cloud, even though it has adopted AWS for the Disney+ streaming service.

The long-running partnership continues despite the recent adoption of public cloud services, because the company still has a need for the responsiveness of internal servers, executives have said. 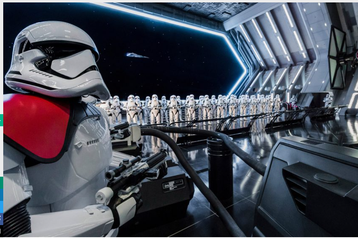 Even when they serve customers through the public cloud, enterprises need some in-house IT, with private data centers virtualized into a private cloud. Disney is no exception.

The company calls its front line staff "cast members", whether they are appearing movies, TV shows, or stage presentations - or simply guiding customers through a ride (or "immersive experience") at a theme park. This crew needs local resources, according to Jason Abrahamson, director of infrastructure engineering at Disney.

"Cast members are the most important aspect of our brand," he said on a Silicon Angle video from HPE's virtual Discover event this week. "Our overall strategy is enabling cast members to do their job as efficiently and effectively as possible. There's nothing more frustrating for a cast member than when they are impeded from getting to a resource they need to efficiently do their job. By having access to the private cloud, by having resources on-premise at times it gives them the ability to deliver those consumer applications even faster."

Disney is a big fan of HPE's Synergy composable infrastructure, which deploys resources as needed, Abrahamson said, saying it delivers a cloud-like experience with local resources.

Synergy is a software-defined hybrid cloud infrastructure that pools resources such as storage and networking so they can be accessed as needed. The company runs VMware Cloud Foundation on top of that, with VMware’s vSphere, vSAN, and NSX virtualization products. Software automates the configuration of these resources, saving time.

Speaking of a theme park experience, Michael Tschanz, director of engineering technology and analysis at Disney Parks, Experiences and Products said in an HPE release: "When you think of a place like Star Wars: Galaxy's Edge, for example, there, there's lighting control, lots of different show items, advanced robotics and control systems—and all of these different things have to come together in a way that keeps the storyline real. To create these experiences, the technology has had to advance over the years. And it's important that we have servers that can handle processing that volume of data at the edge.

Tschanz said that whether to deliver resources in the cloud or locally was a decision that should be "based on good, sound business judgment".

"We have been working for some time to build that simulation and model-based design pipeline, and it takes a lot of processing power to do that. So we need a lot of Edge processing power. It affects how we think about sharing it with the cloud, too."