Immersing himself in immersion cooling

After 27 years at Schneider Electric and subsidiary APC, Johnson stepped down from his position as executive vice president of the secure power division at the beginning of the year, succeeded by Pankaj Sharma.

The next phase of growth 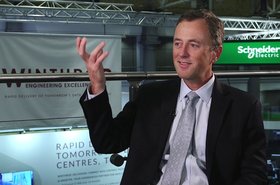 Some say Edge networking is just hype. Dave Johnson explains which applications are real, and which are still emerging

“We welcome Dave Johnson to the GRC Board of Directors with excitement,” Peter Poulin, CEO of GRC, said.

“We believe Dave’s extensive experience within the data center industry, his technical knowledge and his strategic insight will be a valuable addition to our company as we continue to further evolve our product line and go-to-market strategies.”

Johnson joined APC in 1989 from General Electric, spent 10 years at the company, then left to work for several start ups. He returned to APC in early 2003, eventually rising to the role of the division's CEO.

“As densities continue to increase, GRC's innovative approach to liquid immersion cooling will help solve the space, power, and cooling challenges for data center and Edge deployments across the globe," Johnson said.

"GRC's solutions allow customers to adapt to a variety of environments and building specifications for both data centers and the Edge. I look forward to helping GRC drive its next phase of growth.”

The single-phase immersion cooling company offers several modular systems for data centers, including products for the cryptomining and blockchain markets. Its customers include the NSA, US Air Force, and geoscience company CGG.