Standing at 100 ft, the High-Performance Computing Data Center Globe (HPCDC Globe) is part of a six-building project and will house Foxconn Industrial Internet (Fii), a subsidiary specializing in automation and smart manufacturing. Foxconn Technology Group (Foxconn) and its construction manager, Mortenson, topped out the steel framework, and will now proceed to the next job: installing 642 windows to encase the structure.

The structure is part of Wisconn Valley Science and Technology Park (WVSTP), a vast and controversial scheme announced in 2018, under which Foxconn originally promised to build flat screens and other consumer electronics in a complex of factories costing $10 billion, which might eventually employ up to 13,000 people. The proposal required tax subsidies from Wisconsin of up to $4.8 billion, which would have been by far the largest subsidy ever given to a foreign company by the US. Subsequent changes in the project have called this into question. 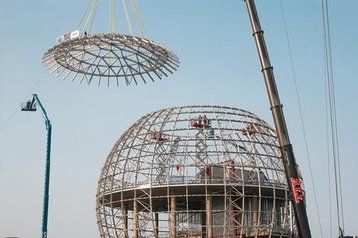 Putting the lid on – Foxconn

Eighth Wonder of the World?

Designed by Eppstein Uhen Architects, the globe includes a 240-seat auditorium area on its first floor, board rooms, and third-floor office space with about 40 work stations. According to Foxconn's release on the topping-out, the globe will also include WVSTP’s Network Operations Center (NOC), from which Foxconn will control the computing resources including 5G networks, cloud computing, and industrial artificial intelligence, across the eventual technology park.

Construction has continued during the Covid-19 pandemic, and Foxconn says it has spent more than $750m on the building project.

President Trump took part in the site's groundbreaking in 2018, along with Foxconn founder and CEO Terry Gou, Wisconsin governor Scott Walker and then-House Speaker Paul Ryan. At the launch, President Donald Trump called it the Eighth Wonder of the World. It was originally scheduled to be completed in 2019. 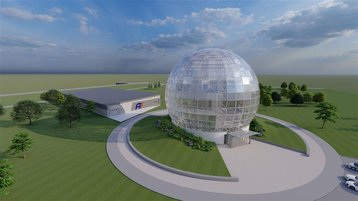 Built north of the Wisconn Valley Science and Technology Park is a 1,000-acre plot located south of Braun Road and east of Interstate 94. The data center is being built close to another Foxconn building between Highway 11 and 20 along Globe Drive. The 155,000 sq ft (14,000 sq m) building is called the Experimental Training Center and is leased by Foxconn to train up employees. 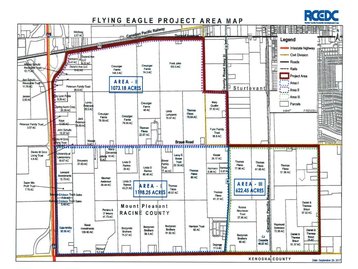 A ground plan of the entire 1,000 acre plot where Foxconn wants to build its complex – wisconnvalley.wi.gov

Back in 2017, the Taiwanese tech supplier was in talks with the Trump Administration to build the data center and accompanying manufacturing complex. At the time, the President said Foxconn had agreed to create at least 13,000 jobs and pump $10bn into Wisconsin’s economy.

President Trump was joined by Foxconn’s chairman, Terry Gou, at the White House in 2017 to announce the deal. Back then, the agreed project would be for a new factory that would produce flatscreen TVs and other consumer electronics. “TV was invented in America,” Gou said, saying similar items were no longer made in the US. “We are going to change that. It starts today in Wisconsin.”

According to the State Journal, President Trump’s top trade adviser Peter Navarro on Thursday (September 17) praised Foxconn’s project milestone. He said: “I think that will bear great fruit down the road as the world economy recovers and they come online with all of their facilities.”

However, the Foxconn site has been at the heart of an ongoing drama surrounding the billions of dollars it was earmarked to receive. 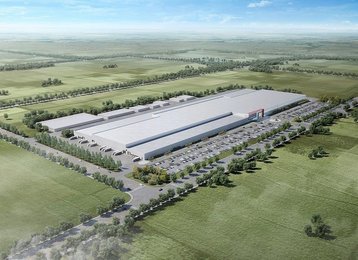 An artist's impression of the dropped LCD factory – wisconnvalley.wi.gov

In November 2018, Foxconn was promised $2.85bn by previous state governor Scott Walker over 15 years in return for 13,000 jobs. The Taiwanese tech giant would also receive a further $1.35bn for its investment of $10bn. There were also tax exemptions on top of the packages upping the total sum to more than $4.5bn - it was expected Foxconn would end up paying $1.4bn into the local economy purely for supplies. According to the Wisconsin government website, the tax credits are allocated on a “pay as you grow” basis.

However, there was doubt over whether the expected $10bn would ever materialize since the initial plan for a one million sq ft LCD screen fabrication plant has now been severely scaled back. It now appears that the plant will produce small screens for mobile phones and tablets. The main difference will be the size of the facility, meaning a different price tag. Experts say the originally planned 10.5th generation screen facility would represent a $10bn investment but now Foxconn is opting for the smaller 6th generation screen facility encompassing an investment of around $2.5bn.

The facility also would only employ around 500 workers when it opens in Q4 of 2020, a bit short of 13,000. The main issue here is that Foxconn has already been promised money to subsidize 13,000 workers.

Meanwhile, The Verge has reported that most of the buildings Foxconn has acquired throughout Wisconsin as innovation centers are largely empty.

In a report from CNBC, Foxconn claimed in April 2020 that it had created enough jobs in Wisconsin to collect on $50m from its incentive package. In a filing, Foxconn Vice Chairman Jay Lee said that by the end of 2019, the company directly employed more than 600 people in Wisconsin, of which he said 550 qualify for subsidies under the company’s contract with the state. The company said it also spent more than $280m on the project.

Right now it is not clear if the state will be willing to pay. Last year, incoming Wisconsin Governor Tony Evers argued that the project had been scaled back so much that it no longer conformed to the agreement drawn up under his predecessor.