Google and Amazon are top PPA buyers, but their net-zero claims are greenwash

Tech giants have taken the lead in a surge of more than 31GW of PPAs (power purchase agreements) for renewable energy. But they are hugely overstating their moves to reach net-zero, according to new reports.

Amazon was once more top in new PPAs for 2021, under which large customers pay to develop solar power and wind farms. It bought 6.2GW, which is more than 20 percent of the total of 31.1GW of PPAs in 2021, according to the latest report on PPAs from BloombergNEF. It now has a total of 13.9GW of contracted PPA power, the 12th largest PPA portfolio in the world, and bigger than many major generating companies.

"The PPAs inked in previous years pale in comparison to the portfolios announced in 2021." said Helen Dewhurst, senior associate at BNEF. In 2021, the figure jumped by 24 percent from 2020's previous record of 25.1GW

Microsoft (8.9GW) and Google (8GW) come in second and third, with Google telling BloombergNEF that it is moving on to "sourcing 24/7 carbon-free power through methods outside of PPAs.”

Despite this big spend, corporations including Amazon and Google are actually overstating their green efforts and committing blatant greenwash by ignoring their Scope 3 emissions, according to a report from NewClimate Institute. The study, carried out with Carbon Market Watch looked at 25 leaders, all of whom make some kind of "100 percent neutral" pledge, only to find that their efforts deliver, on average, a 40 percent cut in emissions, with some delivering as little as 15 percent.

The greenwashing tricks and loopholes they use, include using nature-based offsets such as tree planting to neutralize their current emissions, even though trees take many years to grow, and only retain the carbon until they are cut down or burnt. None of the companies in the report gave enough detail on how their offset schemes will work. 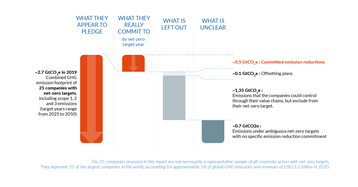 How the climate claims add up – New Climate Institute

"Nature-based solutions have a low likelihood of permanence,” said NewClimate policy analyst Silke Mooldijk. “Trees may be cut down or lost in forest fires, which means that stored CO2 will be released into the atmosphere again.”

Amazon, for instance, has pledged to be net-zero by 2040, but is relying heavily on offset credits from nature-based solutions, such as tree planting or conservation.

"At least two-thirds of these companies rely on carbon dioxide removals from forestry and other biological-related carbon sequestration (nature-based solutions) to claim that their emissions in the future are offset, i.e. that the impact to the climate is the same as if the emissions were never released in the first place," says the report. "But these approaches are unsuitable for individual offsetting claims, because biological carbon storage can be reversed (e.g. when forests are cut and burned) and because there is a global requirement to reduce emissions and increase carbon storage, not one or the other."

Amazon responded with a statement to NBC News: “We believe that nature-based solutions such as conservation, restoration, and improved land management actions play a necessary and complementary role alongside eliminating carbon from business activities to achieve the Paris Agreement."

Others are proudly reducing their Scope 1 and 2 emissions (the CO2 they actually produce) while ignoring the Scope 3 emissions from their supply chain.

Google, in particular, was called out for claiming to carbon-neutral since 2007, while ignoring Scope 3 emissions, which amount to 60 percent of its emissions

Not enough PPAs to go round?

Meanwhile, a report from RE100, the group of large corporates publicly signed up for 100 percent renewable energy use, said there's still not enough available, and it is too hard to buy it.

The RE100 has 349 members, whose consumption totals to more than the entire UK, and are now getting nearly 45 percent of their power from renewable sources.

The BloombergNEF report found that two thirds of PPAs are in the US, and RE100 says the PPA movement is finding it harder going elsewhere.

In some countries, renewable energy is not available or prohibitively expensive, and the local governments and utilities do not allow power purchase agreements. Asia is the region that most often presents such barriers, with South Korea and Japan often cited by RE100 members.

"For the world to progress to net-zero and minimize the effects of climate change, it is essential that businesses and governments work in tandem with one another to ensure that barriers cited in this report are reduced," says the RE100 report.