It follows recent investment in its Equiano subsea cable

Google has officially revealed its intention to establish a Google Cloud region in South Africa, its first in the continent.

It follows a pledge made by Google's CEO Sundar Pichai last year to invest $1 billion in Africa over the next five years. 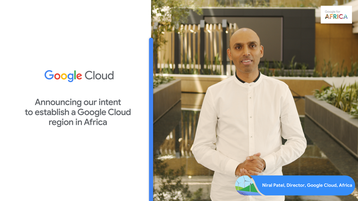 Google confirmed that South Africa will be joining its global network of 35 cloud regions and 106 zones worldwide.

Citing research from AlphaBeta Economics for Google Cloud, Google says that the investment in a South Africa cloud region will provide more than $2.1 billion worth of GDP for South Africa while creating more than 40,000 jobs by the end of the decade.

“We are excited to announce the first Google Cloud region in Africa. The new region will allow for the localization of applications and services," said Google Cloud Africa director Niral Patel.

Google is playing catch-up with other cloud providers, Amazon Web Services (AWS) and Microsoft Azure, with both players entering the continent in the last few years.

Microsoft opened two Azure regions in South Africa in 2019, in Johannesburg and Cape Town, although the latter was closed in 2021.

Meanwhile, AWS opened its cloud region in the country in April 2020, launching in Cape Town.

The cable, which has nine branching points, was initially announced in 2019 and is one of Google's largest submarine Internet cables according to Submarine Networks.

It runs along the western coast of Africa from Portugal and landed in Melkbosstrand, just north of Cape Town on August 8. Equiano is one of Google's six privately-owned cable systems either live or in development and the 19th subsea cable that the conglomerate has invested in overall.

Google forecasts that Equiano will lead to the creation of 1.6 million jobs, per a report commissioned by Google. The report also predicts that the cable will lead to data prices dropping between 16 and 21 percent in the region.