The skunk works division of Google parent Alphabet is experimenting with a system for storing energy that could last longer than lithium-ion batteries, and be more cost effective.

X’s project, codenamed Malta, is a ‘moonshot’ that aims to solve the tricky issue of intermittent renewable energy output that sometimes means that not enough energy is available, or that too much is - forcing it to be wasted. So far this year, California was unable to store 300,000MW of energy from solar panels and wind farms, while Germany had the same issue with 4 percent of its wind energy in 2015 and China with 17 percent. 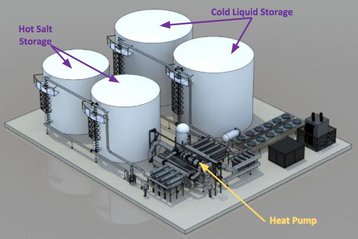 Malta was shown to Bloomberg, who describe it as looking like a miniature power plant with four cylindrical tanks connected via pipes to a heat pump. It can be scaled from the size of a large garage to a full sized power plant that could provide energy on demand to industrial facilities or data centers..

“Think of this, at a very simple level, as a fridge and a jet,” Julian Green, the product manager for Malta, told the publication.

Two tanks are filled with salt, and two are filled with a hydrocarbon liquid or antifreeze. Energy comes in in the form of electricity and is turned into two streams of hot and cold air. The hot air heats up the salt, while the cold air cools the antifreeze.

When electricity is needed, the process is reversed - creating huge gusts of wind that spin a turbine, producing electricity. As salt keeps its temperature exceedingly well, it can store energy for hours, perhaps even days.

“The thermodynamic physics are well-known to anyone who studied it enough in college,” Green said. “The trick is doing it at the right temperatures, with cheap materials. That is super compelling.”

Nobel prize-winning physicist Robert Laughlin is a consultant on the project, after his research paved the way for Malta.

Alphabet cautiously noted that Malta is not an official X project, akin to its self driving car initiative (now spun out as Waymo) or Project Loon, but it has been “de-risked” enough to be made public, and for X to openly look for partners to build, operate and connect a commercial-sized prototype to the grid.

Obi Felten, a director at X, said that she was particularly interested in working with companies in China.

While the X initiative is very much being pitched as an independent business, it very much would be of use to Google proper and its intense energy requirements. This year, the company shifted to 100 percent renewable energy, but via Power Purchase Agreements that see it still taking energy of a grid that struggles to know how to embrace renewable energy with storage issues still outstanding.

Progress has, however, been made with lithium-ion batteries, which have seen their prices drop dramatically in recent years. Perhaps the best known example of lithium-ion grid storage comes from Tesla, which is currently building a 100-megawatt lithium-ion energy storage solution in South Australia. If successful, it will be the largest battery system ever made.

Elsewhere in Google and Alphabet, the corporation has other plans in place to lower emissions and harness renewable energy.

In 2013, it acquired Makani Power, which aims to generate power using drones. News on the group, now under X, is limited, but records reveal it has been testing a windfarm in Waimea, Hawaii as recently as last year.

Earlier this month, Google’s Accelerated Science Team revealed it was working with Tri Alpha Energy to develop an algorithm that significantly speeded up experiments on nuclear fusion,