Now drives are filled with helium and hermetically sealed, it's ok to immerse them in dielectric

Immersion cooling specialist Iceotope and social media company Meta have demonstrated that immersion cooling can be safely used with hard drive storage - by re-engineering an air-cooled storage system to be cooled by liquid.

The study found the liquid-cooled version of the system had a more uniform temperature, and the power required to cool the system was reduced to less than five percent of the system's total power consumption. The silent operation of the system also protected the hard drive from acoustic vibrations which can be an issue for air-cooled hard drives. 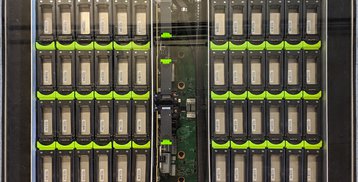 The test took a standard commercial air-cooled, high-density storage system that held seventy-two hard drives in a 40U rack, along with two single socket nodes, two SAS expander cards, a NIC, and a power distribution board, and re-engineered it for single-phase immersion cooling.

The test was important because hard drives, with capacities up to 20TB, currently provide 90 percent of the storage in data centers (according to research by Cybersecurity Ventures). While increasing power densities are driving data centers to consider immersion cooling, hard drives have normally been excluded for fear that they might be incompatible with the technique.

According to Iceotope, the test found that hard drive systems in a rack form factor "turned out to be an ideal fit for precision immersion cooling technology". One reason for this seems to be a change in hard drive engineering. While hard drives have normally been sealed to prevent the ingress of dust, the arrival of helium-filled hard drives means that such drives are now hermetically sealed, making them compatible with immersion cooling.

To carry out the test, Iceotope and Meta added an Iceotope precision immersion liquid cooling system, immersing the drives in dielectric fluid and fitting a dedicated dielectric loop and a liquid-to-liquid heat exchanger and pump.

Facebook-owner Meta then measured temperature variation across the hard drives and cooling pump power in the air-cooled and liquid-cooled systems.

The results showed the variance in temperature between all 72 HDDs was just 3°C, regardless of their location inside the rack. The cooling system released its heat to a secondary water circuit, and the drives operated reliably with rack water inlet temperatures up to 40°C.

On top of that, the system was efficient, with cooling power at less than five percent of the total power consumption. And the companies assert that liquid cooling will mitigate vibrations that have been known to cause damage or failure of hard drives.

Chassis immersion might seem an extreme option, but Iceotope argues that other forms of liquid cooling such as it is less invasive than cold plates, tank immersion, or two-phase immersion, and allows user access for servicing, and the ability to hot-swap drives.

The study is available here.