A university in the Netherlands will develop hardware to manipulate ‘quibits’

Intel has announced plans to invest $50 million into quantum computing research carried out in the Netherlands.

The money will be gradually released over the next 10 years and sponsor QuTech - the quantum research institute of the Delft University of Technology - and TNO, the Dutch Organization for Applied Research. Intel will also provide engineering resources and technical support, hoping this collaboration will advance the state of quantum computing as a whole.

“A fully functioning quantum computer is at least a dozen years away, but the practical and theoretical research efforts we’re announcing today mark an important milestone in the journey to bring it closer to reality,” said Mike Mayberry, managing director of Intel Labs. 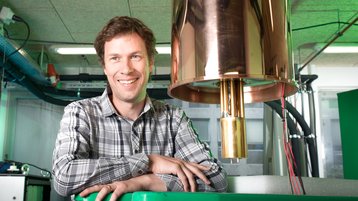 Neither here nor there

Quantum computers interact with information using quantum bits or ‘qubits’. Because quantum states can be superposed, these can measure both ‘1’ and ’0’ simultaneously – just as the famous cat in Schrodinger’s Paradox can be both alive and dead because it is isolated from the outside world in a coherent quantum state.

These devices can therefore process multiple inputs at the same time – effectively in parallel universes – and determine the right answer to problems which have a huge number of possible solutions.

So far, several companies have claimed to have produced a working quantum computer – most notably D-Wave systems, which has sold its processors to Google and NASA. Such claims have been disputed by academics and are completely ignored by Intel.

One of the greatest challenges on the path to quantum computing is the fact that in order to work, quantum processors would require temperatures close to absolute zero, or −273 °C.

“While qubit development has been the focus of quantum computing research to date, low-temperature electronics will be required to connect, control and measure multiple qubits, and this is where we can contribute. Our collaboration with QuTech will explore quantum computing breakthroughs that could influence the industry overall,” said Mayberry.

In its statement, Intel said it believes no one company or organization will succeed in unlocking the path to advanced quantum computing. Instead, it places trust in partnerships between hardware manufacturers and research organizations.

“For the realization of complex circuits containing large numbers of quantum bits, the know-how from the semiconductor industry is essential, and QuTech is thrilled to partner with the leading semiconductor company in the world,” said Lieven Vandersypen, lead scientist at QuTech.