At the ISC 2016 High Performance Computing event in Frankfurt, Intel has announced that the new Xeon Phi processor (previously known as Knights Landing) is now shipping, with options ranging from 64 to 72 cores, including the Phi 7290 - Intel’s most powerful processor to date.

The company also unveiled a new reference architecture for its ’scalable system framework’ (SSF) to provide scalability and balancing for both compute-heavy and data-intensive applications, machine learning and visualization. 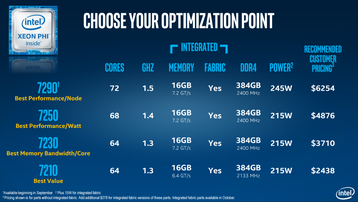 The new Xeon Phi range is an update on the Knights Corner product family. Previous generation chips were only available as PCIe coprocessors, while the Knights Landing products add support for bootable socketed processors and come with an integrated HPC fabric called ’Omni-Path’.

“This provides much better performance, saves you a PCI card, saves power, saves cost. It’s got a number of distinct advantages and so, that’s a first,” said Charles Wuischpard, data center group VP and general manager of the HPC Platform at Intel, in a press call. 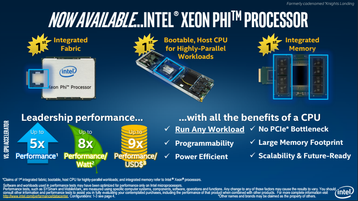 “The 7290, you can think of that as the Formula 1 version of the technology. There’ll be some buyers, but it’s really a premium product, and it’s relatively low yielding, so there won’t be great supplies,” said Wuischpard. 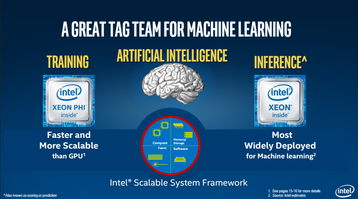 “Most of our early customers, and this includes the large research labs and institutions, have really focused on the 7230 and 7250 as being the best. We actually think the 7310 is going to be the most general purpose high-running card, and we priced it accordingly.”

To go with the Phi, Intel released a new ’scalable system framework’ reference architecture which aims to provide a recommended baseline hardware and software configuration for an optimized HPC system.

“Now, there are workloads out there that are singlethreaded, that maybe benefit from higher frequency, and fewer cores, and of course you would run those on a Xeon. But, it doesn’t mean that those applications won’t still run on a Xeon Phi.

“So some of our early customers are implementing an entire supercomputing cluster with Xeon Phi. Others are doing a mix of Xeon and Xeon Phi,” said Wuischpard.

He added that, outside of HPC environments, there is interest in the processors being used in data centers for machine learning and artificial intelligence.

Over 100,000 Xeon Phi processors are expected to be sold this year, to customers including Cray, HPE and IBM.