The data center that won't die may finally be dead

Ireland's High Court has overruled a decision to give Apple more time to build a data center in Athenry, County Galway.

Last year, the Galway County Council extended Apple's planning permission for a long-delayed and likely-canceled data center, even as Apple looks to sell off the land.

Should Apple still wish to develop a data center at the site, it would need to reapply for planning permission. 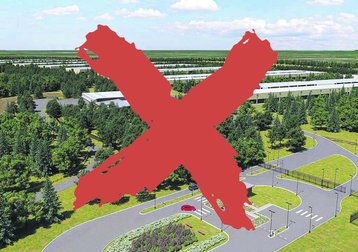 Apple first bought the land for around $15 million way back in 2014. Its plans to build an €850m ($998m), 263,000 sq ft (24,000 sq m) data center were approved by the local council three years later, but appeals kept bringing the case back to the Irish planning board (An Bord Pleanála) and the Commercial Courts.

The company’s plans led to some protests (as well as marches in favor of the project), and environmental campaigners that appealed to stop the development. Other challenges, a shortage of judges, a hurricane that closed courts, and more court issues repeatedly delayed the project.

Apple subsequently abandoned its plans in 2018 and put the land up for sale in 2019, despite Ireland’s then-state head Leo Varadkar promising to "do anything" to get it back on track. No buyer was been found and the land was recently reported as still for sale. Following the lengthy failed process, Ireland revamped its planning process for data centers to make it faster.

Amid the ongoing efforts to sell the land, Apple applied to extend its planning permission for the site until November 2026.

“Due to delays associated with the judicial processes initiated after the relevant planning consent issued and, more recently, the complications over the last year... arising from the Covid-19 pandemic, the subject development has not been brought to fruition,” the application stated.

“This extension... is being sought in order to provide adequate time to facilitate the provision of the subject development. It is the intention that the project will be undertaken as soon as practicable once suitable developers are identified.

The extension was granted last August, but a local resident soon challenged the project - taking it to the High Court.

Allan Daly, whose home is close to the proposed facility, said that the extension is invalid because there was no public consultation, and local residents' submissions were not considered. He also claimed that environmental policies such as carbon emissions targets had changed substantially since Apple's initial application, and that it required a reassessment.

Over the eight years the project has been mooted, building data centers in Ireland has also become more challenging, as facilities risk overwhelming the grid.

State-owned electric power provider Eirgrid has imposed an effective moratorium on new data centers in the greater Dublin area, and gaining permission across the east coast of Ireland is increasingly difficult. On the west coast, Galway is less directly impacted by the Dublin moratorium, but is still caught up in Ireland-wide power concerns.

EirGrid claims that data centers currently use 12 percent of electricity in Ireland, and warned this could grow to between 21 and 30 percent by 2030.