Iron Mountain acquires Spain's XData, gets one facility in Madrid

Iron Mountain has acquired a data center in Madrid, Spain, and acquired additional land in Mumbai, India, and Phoenix, Arizona.

First reported by DCF, the company has acquired XData Properties, which was developing a data center in the Spanish capital. 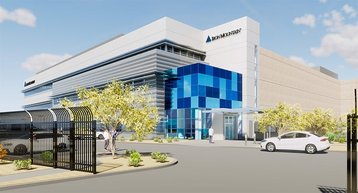 Rendering of the new facility in Phoenix – Iron Mountain

According to Iron Mountain, the 60,000 sqm (645,800 sqm) facility currently has 3MW of capacity, with 79MW planned over the next decade. A further 10MW of capacity is currently under construction

"We are really bullish about that market," said Iron Mountain CEO Bill Meaney. "Madrid is a market we have wanted to get into for some time. It's not power-constrained, like so many other markets in Europe. It also comes with a pipeline of activity from our existing customers who are interested in that market."

During the company’s Q3 earnings results, Iron Mountain CFO Barry Hytinen added: “We closed the Madrid data center transaction early in the fourth quarter for an initial purchase price of $78 million, which is subject to an additional $10 million earn-out.”

XData Properties was set up by Stoneshield Capital in 2021. Its portfolio consisted of a data center in the San Fernando de Henares area of Madrid bought from Spanish IT firm Indra in 2021 for a reported €40 million. The seller, Indra, is Spain's largest IT group and was set to remain as a tenant for one year (extendable to 18 months) while it found new accommodation for its resources there. XData was working with Huawei on the development.

It was reported over the summer that Stoneshield was seeking investment in XData.

In Phoenix, Iron Mountain has acquired a 10-acre property next to its existing campus in the city.

DCF reports the property includes a 50 MVA substation, with the ability to expand to 100MVA. The company plans to build a 36MW data center on the new property, with about 230,000 sq ft of space.

“This is an important expansion in a key market, as our current 89MW AZP campus is nearly fully leased or committed," said Meaney.

Iron Mountain to expand in Mumbai

During the company’s Q3 earnings call Meaney added the company had expanded its footprint in India and secured land and power for 20MW of additional capacity in Mumbai.

A version of this story appeared in our Spanish edition.