The company emerged in 2019 with a plan to place low-cost facilities at wind and solar farms. These would stand idle, until there was a surplus of renewable power, and then ramp up to run HPC jobs for customers. Now Lancium is offering its patented Smart Response software to others running conventional facilities who want to switch capacity on and off at will. 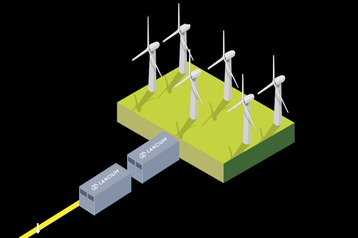 "Renewables are the future," Lancium CEO Michael McNamara told DCD in a phone interview. "We want more on the grid, but the problem is there are intermittent periods of excess energy." Wind and solar farms produce energy when the wind and sun allow, which may not match the demand. "If it is very windy and sunny, prices go negative. This happens more and more and makes it harder to build more renewable facilities - because negative pricing is not a good business model."

Lancium's idea is a "pausable" facility, he told us: "We want an unusual data center that turns on when the grid price is low." This helps the uitility too, he said: "The grid wants to ensure there are no brownouts, and the best way to do that is to have a responsive load."

Lancium's plan is to build these at sources of renewable power, where they can siphon off any surplus power without losses in transmission. Customers would send "batch" processing jobs which are not time-sensitive, to be carried out when they are economically viable.

While Lancium plans to make facilities running on 10MW to 100MW, it currently has a 2.5MW test facility outside Houston, Texas. "It's a simple warehouse shell, not a traditional data center, with no HVAC, the racks are placed on the floor, and there's no redundant power and cooling." The company has not yet built a facility at a wind farm, but is offering offering free test loads.

"The facility monitors the price in real time, so it knows eactly what the grid needs," he said. "Customers send pausable jobs, which are large batch jobs not needed in a particular time," These can be machine learning, siesmic processing, weather simulation, or molecular modeling for drug discovery."

The company is working with a couple of universities on this area, but a lot of the capacity is currently used for Bitcoin: "Bitcoin has a simple business model and reliable processors."

A data center at a wind farm might be able to work 85 percent of the time, according to McNamara. The Texas utility ERCOT (Electric Reliability Council of Texas) has very dynamic pricing which can vary 30-fold, creating an opportunity for pausable data centers, he said.

To make the jobs pausable, Lancium uses software containers which can be paused and put into suspended animation under software control, ramping computing up and down, and suspending and resuming tasks, and migrating them to different facilities on demand.

This software has now attracted the attention of traditional data centers companies, and Lancium plans to license it to enable other operators to bring a measure of pausability to their own facilities.

Traditional data centers want a return on their investment in hardware, so rarely let it lie idle. McNamara said that its data centers can be built cheaply using older generation CPUs and GPUs, with no UPS, HVAC or redundant systems, and since real estate is also cheap at remote wind farms, idle hardware can be viable.

The beta test offers to run jobs on Intel Xeon E5-2680 CPUS, or Tesla K40 and K80 GPUs, with quality of service set at medium or low.

The company has five patents (the fifth one - US patent number 10,608,433 - announced this week) for functions of its Smart Response power management software, which allows data centers to adjust server electricity consumption based on power grid conditions such as price and frequency.

Lancium is funded by SBI Holdings of Japan, an Internet finance firm with interests in cryptocurrency. In February 2019, SBI provided equity and debt funding for the company while also committing to use the service to run cryptocurrency mining on Lancium's facilities.