… and includes a few words from the god himself

Lenovo will launch Neptune - a three-pronged approach to liquid cooling in the data center, at the International Supercomputing Conference (ISC) in Frankfurt, Germany next week (June 24-28). As well as the warm water cooling systems developed by IBM and acquired by Lenovo, Neptune will include conventional rear door heat exchanger liquid cooling, and hybrid systems combining liquid cooling with air conditioning.

The Neptune offering, based around Lenovo’s ThinkSystem SD650 servers, is being launched at the Frankfurt supercomputing show, but Lenovo predicts the technology will be used more widely, as it can offer a 50 percent increase in efficiency. The company also added a whimsical interview with the god Neptune himself - who seems remarkably well versed in all Lenovo’s products. 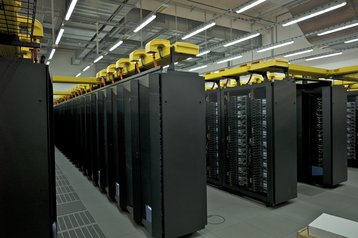 Read: Getting into hot water – IBM

”In Roman mythology, Neptune used his three-pronged trident to tame the sea,” says the release. ”This inspired Lenovo’s liquid cooling trident of cooling technologies: Direct to Node (DTN) warm water cooling, rear door heat exchanger (RDHX) and hybrid solutions, which combines both air and liquid cooling.” The three approaches are combined with an ”energy aware runtime” system that optimizes the heat removal from all components of the system.

The DTN hot-water cooling system was developed by IBM’s System x division for the supercomputing x86 cluster at Leibniz-Rechenzentrum (LRZ) in Munich, Germany. It uses water at 50°C (122°F) to cool processors, reducing energy consumption by up to 40 percent.

The liquid-cooled ThinkSystem SD650 servers have no fans and can operate at up to 240W, compared to 165W for the air-cooled versions. so they deliver more performance for less power, says Lenovo.

In an interview with DCD about the history of the LRZ SuperMUC supercomputer, Martin Hiegl, Lenovo’s business unit director for HPC and AI, he told us: “In our lab we showed that we can run up to 300W today, and for our next generation we’re looking at 400-450W.” Lenovo’s upgrade of SuperMUC will feature 6,500 ThinkSystem SD650 nodes.

Neptune’s rear door heat exchanger (RDHX) keeps the liquid further from the IT kit, in the rear door of the rack where it operates like a car’s radiator. It reduces, rather than replacing air-conditioning, by cutting the amount of heat expelled to the hot aisle.

The hybrid cooling prong is the least defined, with Lenovo promising to “blend liquid and air cooling within the same system in the near future” - although the RDHX arguably already does this.

At the same show, liquid cooling specialist CoolIT will be emphasizing the mainstream credentials acceptance of its direct contact liquid cooling (DCLC) and coolant distribution units (CDUs), which use coldplates to transfer heat from electronics to liquid, which can be fitted to many regular IT systems.

CoolIT has a CDU compatible with Intel’s Buchanan Pass server, the Dell EMC PowerEdge C6420 server has a liquid cooled option from CoolIT, CoolIT technology is available for the HPE Apollo 2000 server, and the Stulz Micro Data Center is also available with CoolIT DCLC. 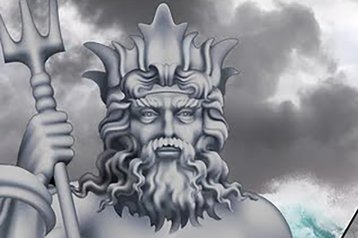 Neptune: not a fan of Cupid – Lenovo

A word from our sponsor

For its part, Lenovo turned to the Roman god Neptune himself for some words of praise and encouragement. In a published interview, the “spokesgod” rattled off Lenovo specifications, saying that liquid cooling is very easy: ”Take it from a guy who rides horses through the ocean, it’s not difficult at all.”

The Lenovo interviewer obvioulsy touched a nerve when they asked ”Isn’t it ungod-like to commercialize your name?”

Neptune responded: “Seriously? Every February I have to see Cupid’s diapered butt festooned on everything associated with Valentine’s Day.”