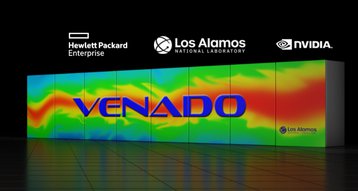 Grace is Nvidia's upcoming 72-core Arm-based CPU, with the superchip featuring two of them and a DDR5 memory subsystem in one package. The Grace-Hopper Superchip, meanwhile, combines one Grace CPU with an H100 GPU over the company’s 900 GB/s NVLink-C2C interconnect.

Venado "will be the first system deployed not just with Grace-Hopper in terms of the converged Superchip but it’ll also have a cluster of Grace CPU-only Superchip modules,” Dion Harris, Nvidia’s head of data center product marketing for HPC and AI said in a press conference ahead of the International Supercomputing Conference.

The supercomputer will be delivered by HPE Cray, and is scheduled for deployment to early users in 2023 with general availability in early 2024.

The new details come the day after Oak Ridge National Laboratory's Frontier system was declared the world's most powerful supercomputer, although it may be behind a secret Chinese supercomputer.