LUMI supercomputer to use district heating for cooling

One of Europe's upcoming 'pre-exascale' supercomputers plans to install a district heating system.

Finnish data center CSC – IT Center for Science will be home to the 150 petaflops LUMI supercomputer once its suite is complete in 2021, one of a number of systems serving as a stepping stone before an eventual exascale supercomputer.

Engineering company Loiste Lämpö will install the district heating system, which hopes to keep nearby homes and businesses warm in a place where temperatures can sometimes be lower than -30C (-22F).

The facility, based out of the Renforsin Ranta Business Park in the city of Kajaani, is used by multiple research disciplines and hosts a cloud service for academics. The site also has access to renewable energy via Kajaani's two hydropower stations.

“Reducing the carbon footprint is a globally critical target, to which the location of the EuroHPC machines have a huge impact, as supercomputers consume plenty of electricity," CSC’s managing director Kimmo Koski said.

"The advantages of Kajaani are the use of renewable energy and the possibility of hot water cooling, thanks to which the waste heat released from the data center can be utilized in Kajaani’s district heating network.” 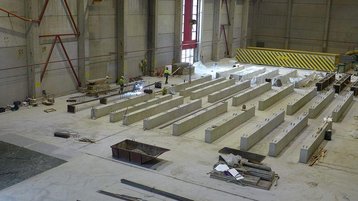 A picture of the construction site at CSC's data center – Esa Heiskanen / CSC.

LUMI is a joint effort of the EU's EuroHPC program. In a bid to quickly develop the EU's supercomputer infrastructure, €1bn ($1.2bn) was set aside to fund the project.

Half of the funds are understood to come from EU member states and the other half from the European Commission. The aim was initially to have two ‘world-class’ pre-exascale HPC systems, but now it will have three machines available for public and private use by next year, with LUMI one of these machines.

It will be joined by MareNostrum 5, the Barcelona-based supercomputer which will top out at 200 petaflops peak performance, and the CINECA site in Italy which will be home to the 270 peak petaflops Leonardo supercomputer.