Company looking to build outside South Hill, around 20 miles from existing Boydton campus

Microsoft has filed for environmental permits to build three data center buildings at a greenfield site in Mecklenburg County, Virginia.

The district commander of the US Army Corps of Engineers has received a joint permit application for federal and state permits from Microsoft for its Hillcrest Site Data Center. 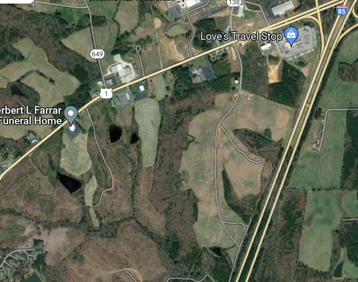 The project site is located on a 132-acre site at 210 Tunstall Road, in Southern Virginia’s Mecklenburg County. The site is north of South Hill and between North Mecklenburg Avenue and I-85.

Microsoft acquired the land around 2020; it filed for and approved a zoning request at the site in early 2021.

The original test fit design for the Hillcrest project included eight data center buildings totaling 336MW of total capacity – including five 48MW buildings, one 28.8MW, and one 19.2MW building – but would have resulted in 'impacts to nearly every wetland and stream feature' located on the site. Five buildings were removed after further planning design; while it doesn’t specify in the documents, the three planned buildings match the design of the 48MW specification.

The filings note three additional sites within the designated Boydton area of Mecklenburg County were considered as off-site alternatives but had additional environmental, water, and power considerations that would have increased costs.

The Hillcrest site is less than 20 miles away from Microsoft’s existing Mecklenburg County campus outside Boydton. The Boydton campus was first announced in 2010 and built at the cost of nearly $500 million – at the time hailed as the largest economic investment in Southern Virginia history. It was expanded repeatedly, first in 2011, then in 2013, 2014, 2015, and 2016.

The company has two Azure cloud regions in Virginia – East and East 2 – as well as two government-dedicated zones known as US DoD East and US Gov Virginia.

The Corps of Engineers is soliciting comments from the public, federal, state, and local agencies and officials; Indian Tribes; and other interested parties in order to consider and evaluate the direct, indirect, and cumulative impacts of this proposed activity. Public comments on the development should be received by close of business on August 17, 2022.