EnergyAware UPS can feed energy into the grid when needed

Microsoft has signed a deal with Eaton that will make its data centers backup power supplies systems part of the electricity grid, supporting the integration of renewable energy sources.

Eaton's grid-ready EnergyAware UPSs can respond to control signals from the electricity utility, and offer power to the local grid, when there is an issue with supply because of peaks in demand, or troughs of supply from wind farms or solar plants. Microsoft says it will use the smart UPS systems in key markets, and take part in grid-stabilizing initiatives. 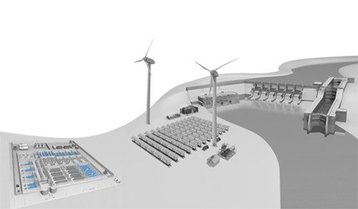 Data centers store energy in their UPS batteries, and for several years it's been suggested that some of this could be made available to the grid for stabilization purposes. Schemes like fast frequency response have been available for some time, and Eaton was involved in trials in Ireland for the technique, testing it under the name "UPS as a resource" (UPSaaR) since it offers the energy as a resource to the data center and the local grid as required.

Such schemes offer the data center a revenue stream in exchange for sharing small amounts of energy at key moments, but they have failed to take off as data center operators prefer to keep control of their own energy stores. There are signs that this attitude may be changing.

Microsoft is already involved in multiple projects to decarbonize its backup power and make better use of the energy. These include a newly-announced micro-grid in Silicon Valley powered by biogas.

The company has also been testing the use of hydrogen fuel cells which recently powered some Microsoft data center equipment for 48 hours, and Microsoft has been testing vegetable oil fuel for some diesel generators in Sweden. In the US, the company is using battery-based systems in a test with Total.

“Grid-interactive UPS promotes CO₂ reduction on the energy grid, extending the sustainability benefit beyond the data center. This is radically changing the landscape in terms of energy management within the overall environmental profile of data centers,” said Craig McDonnell, senior vice president and general manager of the Energy Transition and Digital Division at Eaton.

“A grid-interactive data center is a data center whose electrical system not only protects IT data from customers and applications, but also provides valuable electrical services back to the energy grid. These additional capabilities will play an increasingly important role in supporting the power grid in managing high volumes of variable and renewable energy,” said Sean James, Director of Datacenter Research, Microsoft.