Microsoft will buy some 'green' fuel for backup generators in Sweden

A small step towards its promise of eliminating diesels by 2030

Microsoft is buying "low-carbon" diesel fuel from Swedish petroleum firm Preem for its data centers in Sweden, to drive towards a goal of eliminating the company's diesel dependency by 2030.

In 2020, Microsoft announced a new cloud region in Sweden, which will be entirely powered by renewable energy from the local utility Vattenfall. However, backup generators are still needed, so Microsoft has announced it will buy Preem's eco-rated Evolution Diesel Plus, which contains at least 50 percent biological material from renewable sources. This will reduce the emissions created during outages and generator tests, and move Microsoft to its environmental goals: it's promised to be carbon-neutral by 2025, and diesel-free for backup by 2030. 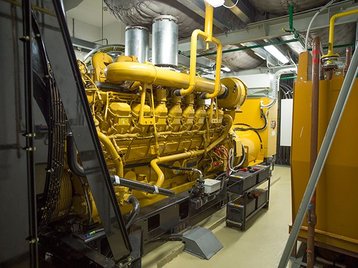 Fuel of the future?

"While diesel fuel accounts for less than one percent of our overall emissions, we believe it is important to help accelerate the global transition away from fossil fuels and a step to help drive demand for sustainably-sourced, low-carbon fuels," said Noelle Walsh, Microsoft corporate VP, cloud operations and innovation - words previously said by Microsoft's chief environmental officer Lucas Joppa, who made the diesel-free commitment in July 2020.

"We’re charting a new course using low-carbon fuel sources, including hydrogen and energy storage," said Joppa in 2020. "We recognize the challenges this might entail and that we need help in developing a robust supply chain for these fuels and advancements in battery technology, but we’re ready to work with partners across the world while leveraging investments from our Climate Innovation Fund to make this a reality."

Reading the Preem announcement in detail, it seems this is not a complete switch to eco-fuel. Preem has been selected as a supplier of "a low-carbon fuel that can be used for the Sweden data centers' backup generators." The fuel will now be available "as an option" for Microsoft´s Swedish data centers, the release says.

However, the release also suggests it hopes to cut its diesel-related emissions by 45 percent, so those statements may just be expressions of caution. The generator supplier Caterpillar has been part of Microsoft's work to transition its diesel towards fuel containing renewable carbon.

It's also worth noting that the Preem fuel is eco-labeled, but only guarantees to replace half its material with material from renewable sources. As a petroleum company, Preem is making steps to transition to renewable fuels: it began producing its renewable fuel at its Lysekil refinery in November 2020 and has withdrawn an environmental permit application for the site, in favor of more renewable production. The Lysekil plant is capable of creating 100 percent renewable fuel.

Microsoft has been pushing to decarbonize for some years - having first promised to reduce its use of diesel way back in 2012. At the time, Microsoft promised that its Quincy data center and other facilities could be run without diesel generators for backup, because of the reliability of the grid and the option to shift cloud loads elsewhere in the event of a grid failure. That idea seems to have fallen by the wayside, even in Sweden where levels of grid reliability are very high indeed.

In the longer term, Microsoft has previously experimented with fuel cells, and announced plans to use hydrogen fuel as part of its plan to reduce carbon.

"Preem wants to be part of the transition to sustainability and today invests significant resources in developing the market's most sustainable fuels. We are extremely pleased that Microsoft has chosen to collaborate with us in its journey toward becoming carbon dioxide negative by 2030. The collaboration with Microsoft and Caterpillar bodes well for the future," said Christian Bjerdén, VP Head of Sales at Preem.