HPE supercomputer offers 4.7-petaflops for AI research and is housed in a purpose built 'EcoPOD'

The TX-GAIA is capable of delivering 4.7 petaflops thanks to nearly 900 Intel processors and 900 Nvidia GPU accelerators. Ranking organization Top500 found that TX-GAIA has a peak performance of 100 'AI petaflops,' which it claims makes the most powerful AI supercomputer at any university in the world.

An AI flop is a measure of how fast a computer can perform deep neural network (DNN) operations. 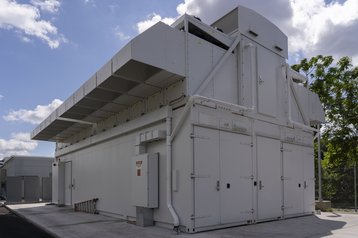 The new TX-GAIA supercomputer is housed within a 'EcoPOD' modular data center, manufactured by Hewlett Packard Enterprise - a concept first revealed to the world back in 2011. The system joins other machines at the same location, including the TX-E1, which supports collaborations with MIT campus and other institutions, and TX-Green, which is currently ranked number 490 on the Top500 list. All are hydroelectrically-powered.

“We are thrilled by the opportunity to enable researchers across Lincoln and MIT to achieve incredible scientific and engineering breakthroughs,” Jeremy Kepner, a Lincoln Laboratory Fellow who heads the LLSC, said.

“TX-GAIA will play a large role in supporting AI, physical simulation, and data analysis across all Laboratory missions.”

The TX-GAIA supercomputer is expected to come online in the Fall, and the system's integration into the LLSC will be completely transparent to users.

“The only thing users should see is that many of their computations will be dramatically faster,” Kepner said. Among its users will be the Department of Defense and the Air Force.

Earlier this month the Milwaukee School of Engineering (MSOE) opened a Computational Science Hall that houses a 'state-of-art' data center and a Nvidia GPU powered supercomputer.