A new European Clean Hydrogen Partnership has this week announced a project to develop hydrogen fuel cells for data centers.

The €2.5 million EcoEdge PrimePower project (E2P2) will build a proof-of-concept to show the use of low environmental impact fuel cells in data centers. It is being funded by the European Clean Hydrogen Parternship, announced on Sunday at the opening of European Hydrogen Week.

The project will be delivered by a consortium of seven members which includes data center operator Equinix and power equipment provider Vertiv along with research bodies Rise and Tec4Fuels, Italian power infrastructure company Snam, and eco-entrepreneurs InfraPrime.

The E2P2 partners will combine solid-oxide fuel cells with uninterruptible power supply (UPS) technology and lithium-ion batteries to provide clean primary power for data centers and other critical infrastructure. The fuel cells will consume natural gas, before transitioning to green hydrogen, and will be used for both prime power and backup, according to the E2P2 project plan. 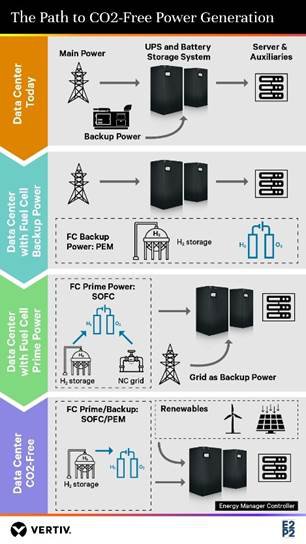 Because fuel cells can consume methane (natural gas or biogas) and hydrogen, they are seen as a good transition from fossil fuels to sustainably-sourced hydrogen. Fuel cells can be installed onsite, and connected to the fossil gas main. "Green" hydrogen, produced by electrolysis using renewable electricity, can eventually be delivered over the same gas pipe network currently used by fossil natural gas.

E2P2 aims to build market buy-in for the technology by proving that hydrogen fuel cells can be reliable and efficient enough to be used as decentralized prime power sources on an industrial scale, starting with a real-world data center that does not rely on diesel generators.

The consortium hopes to develop an open standard for fuel cell applications, which will meet the resiliency requirements of data centers and make commercialization easier across Europe. Establishing data centers as large consumers of green hydrogen could catalyze a market for the product and accelerate its development, the group hopes.

As part of the project. Vertiv will develop a fuel-cell power module that includes its Liebert EXL S1 uninterruptible power supply (UPS) and lithium-ion batteries. The company's Italy-based AC power business and its Croatia-based modular division will jointly produce a 100kW power module by 2023, and then produce a multi-MW commercial product for data centers. Vertiv is also working with key global customers to develop new hydrogen-based generators that will help replace diesel generators.

The Clean Hydrogen Partnership, previously the Fuel Cells and Hydrogen Joint Undertaking (FCH JU), was announced this week: "With its ongoing support of research and development of fuel cells for stationary applications, the Clean Hydrogen Partnership (previously FCH JU) managed to set a strong basis for European industry to lead in the deployment of new technologies," said Bart Biebuyck, Executive Director of the Partnership. "We are proud to see that the E2P2 project will provide clean fuel cell-based applications for the decarbonization of data centers within a solid consortium gathering fuel cell providers, system integrators as well as data center operators and energy utilities. Projects such as E2P2 are absolutely essential in offering solutions to un-tap markets with great potential and contribute to our ambitious EU climate targets.”

Dr. Jon Summers, scientific lead in data centers at Rise, said: “This decade is undeniably focussed on building a future that is environmentally sustainable. We all know that digitization and data centers are key elements of this future, where innovation is at the heart of our journey to our global 2030 goals. As researchers at RISE, we are invested to be a strong part of the E2P2 team, to push the technology envelope, and to transparently demonstrate new sustainable approaches of prime power for the future digital infrastructure.”

Cosma Panzacchi, executive vice president Hydrogen at Italian energy infrastructure company Snam, said: “We are happy to contribute our know-how to the E2P2 alliance to help tackle the issue of powering urban data centers with clean and competitive energy solutions. The concept of connecting fuel cells to gas networks to power resilient urban and Edge data centers overcomes the need to have backup generation in such areas, thus reducing emissions as well as noise impact. This project is part of Snam's efforts to foster the use of hydrogen to decarbonize economic sectors, leveraging existing gas networks and sustainable technologies like hydrogen-ready fuel cells.”

Tec4Fuels is a competence center for sustainable liquid and gaseous fuels. Its managing director. Dr. Klaus Lucka, said the center would: “contribute its know-how to the research project in the supply and purification of the process gas medium and water.

"In addition, Tec4Fuels is developing a sensor-based fluid condition monitoring system to monitor gas and water quality. The aim is to help reduce system-related greenhouse gas emissions by optimizing the operational reliability and service life of technical components and increasing the efficiency of this subsystem.”

Giordano Albertazzi, president for Vertiv in Europe, Middle East, and Africa said: "Vertiv is proud to actively contribute to the E2P2 proof-of-concept initiative and looks forward to provide next-generation power solutions to its global customers”. Vertiv is also part of the Sustainable Digital Infrastructure Alliance (SDIA) and the European Data Centre Association (EUDCA) and contributes to the Climate Neutral Data Centre Pact.