The companies previously worked together on Sonic

The Finnish network company will supply 7250IXR chassis routeres to enable Microosft to shift to 400 Gigabit Ethernet (400GE) in its Tier-2 network architecture, as well as other network hardware for Microsoft network applications. 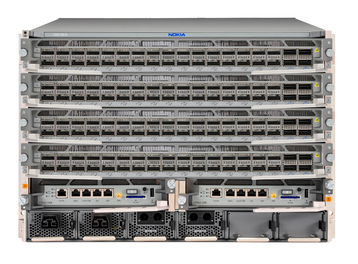 Nokia launched its data center switch architecture in 2020, and complies with the open source Sonic data center networking software platform, which Microsoft first released for general use in 2016, through the Open Compute Project. The intention of Sonic is to limit proprietary switching and make data center networks more of a commidity play.

As a recent entrant to the data center switching field, Nokia will be a surprise choice compared with market leaders like Arista, but the use of Sonic means that Microsoft can run the same software whoever's hardware it adopts.

Terms of the deal weren't announced, but we can assume that Microsoft drove a good bargain, with Nokia accepting pricing and conditions favorable to the cloud giant, in order to establish its name in the field.

The Nokia switches will be deployed as chassis based systems (with upgradeable card modules) and fixed-form-factor switches (boxed units), that can be used in in top of rack (TOR), leaf, spine and super-spine applications. Supporting 400GE now, Nokia has promised 800GE in future, along with all the IP and Ethernet options.

“Today’s data centers have their own unique operational challenges, and Nokia has been working closely for some time now with Microsoft to understand its evolving data center needs and requirements," sasid Vach Kompella, Vice President, IP Networks Division, Nokia.

Nokia has made some significant network strides lately. It's playing a major role in the move towards open radio access networks (OpenRAN), and won the right to replace Huawei in BT's netwoks when the Chinese vendor was excluded for security reasons. Nokia is also deploying a 4G network on the Moon for NASA.

Less to its credit, it recently emerged that Nokia built surveillance systems for the Russian state.