A school, a plant nursery, and a swimming pool all use warm water from the site

The Aalsmeer Energy Hub, developed with help from the municipality, transports hot water from the NorthC data center to customers including a swimming pool, a school, and a plant nursery, which then use heat pumps to efficiently raise the water to higher temperatures. Contracts were signed for the project in 2016, which was formally announced in 2019, and started work at the beginning of 2020. This week, a story in RCC Koude & Lucht, a Netherlands-based specialist refrigeration publication, reports that the Hub is up and running.

NorthC is warmer than it sounds 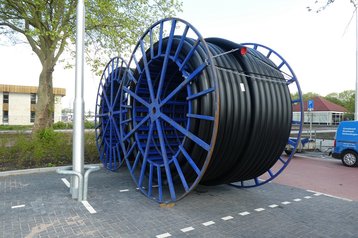 The 4MW data center in the project was set up by NLDC, a subsidiary of Dutch telecoms company KPN, which was sold to Deutsche Bank subsidiary DWS in 2019, and then merged with TDCG in 2019 and rebranded as NorthC in 2020.

The Hub manages to capture and reuse the facility's waste heat and around 20 percent of it goes to the IKC Triade school, the Fertiplant plant nursery, and a swimming pool and sports hall called Die Waterlelie, according to the RCC Koude and Lucht story by Uko Reinders. Other heat could be used elsewhere but the distance to other potential customers would make this harder, according to Reinders.

The data center uses outside air cooling as long as the temperature is below 18˚C, but otherwise uses chilled water. The air is expelled at about 25˚C. "That heat was previously blown into the air," says Reinders [Google translate]. "A shame, of course, because it involves a lot of energy: no less than 4MW. This is now 0.75MW less during peak days; that energy is used for heating at three companies and institutions in the area."

The water goes through a 1,400m pipe and reaches customers at a temperature of 22˚C, having traveled as far as 25m underground. Apparently, the project decided to go deep and use horizontal directional drilling (HDD) because of the risk of meeting other pipes and potentially Second World War ammunition.

After giving up its heat to customers, the water returns to the data center at a temperature of 12˚C, to be used again for cooling. Surprisingly, there's no need to insulate the pipe, which would have added to the cost, because the water flows at a high speed of 1.5m/s, Jeroen Roos of the energy transfer company Infinitus told Reinders.

Fertiplant uses warm water all year round to heat its offices and planting areas, as well as to clean plant roots. The company initially hung onto its gas boiler as a backup, but has now dispensed with it. The swimming pool and the school have yet to fully test the system because they have been closed and not used heat during the coronavirus crisis.

There is a residential area nearby, which could potentially use waste heat from the data center, but this has not been done yet. Apparently, NorthC would have to meet supply obligations to serve domestic consumers, under the Netherlands' Heat Act. 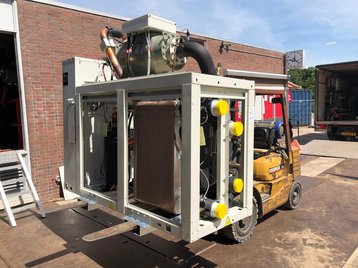 Heat pumps from Trane arrive at the swimming pool – NorthC

Data centers are increasingly encouraged to help their neighborhoods to reduce emissions on heating, by offering their waste heat to nearby homes and businesses. So far, comparatively few organizations have been able to benefit, because of the high capital costs of such projects, and the relatively low quality of data center waste heat - it tends to come in the form of warm air or lukewarm water.

However, in recent months, the data center operators of Europe have signed a climate-neutral data center pact, which promises that they will at least consider offering waste heat to district heating systems where appropriate. Meanwhile, the Norwegian government's Minister of Energy Tina Bru has proposed that all data centers in Norway should be required to evaluate the possibility of connecting to one.

The trade magazine and website RCC Koude & Lucht, where we read about this, are produced by the Royal Dutch Cold Society ( KNVvK ), a technical-scientific association founded in 1908 by Nobel Prize winner Kamerlingh Onnes.