But Microsoft has already filed a protest against the contract between the two mass surveillance organizations. 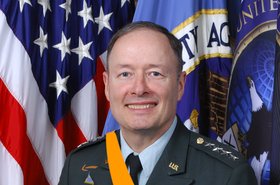 The NSA contract, first reported by NextGov, is code-named "WildandStormy." Details of the “Hybrid Compute Initiative” are limited, but could be part of the NSA's overhaul of its Intelligence Community GovCloud primary classified data repository.

Microsoft has officially contested WildandStormy's award to Amazon, but has not detailed why. "Based on the decision we are filing an administrative protest via the Government Accountability Office. We are exercising our legal rights and will do so carefully and responsibly," the company said in a statement.

A GAO decision is due by October 29th.

Microsoft's attempt to block the deal comes after AWS successfully managed to scupper the $10 billion JEDI cloud contract which initially went to Microsoft.

The Department of Defense contract was awarded to Microsoft in 2019, but held up in courts by AWS. It has now been canceled, with the Joint Warfighter Cloud Capability set to divide the workloads between AWS and Azure.

The Central Intelligence Agency is trying a different route - its C2E contract, which could be worth tens of billions, was awarded jointly to AWS, Microsoft, Google, Oracle, and IBM. Each will compete for specific task orders.