The Japanese company provided few details about the system, but said that it would help it reduce data center costs by eliminating human workers. 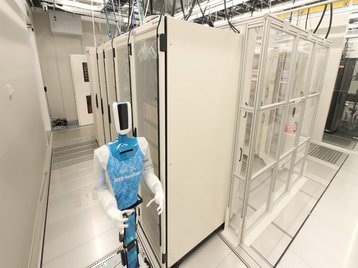 "The cost of the data center is very high, and most of it is labor cost," NTT's Yusuke Imaeda said.

"In this situation, relying too much on human resources will prevent providing good data center service. As the number of data centers continues to increase, the robot is being introduced to improve efficiency to provide safe and secure service to the customer."

A simple reception robot uses facial recognition to check pre-registered visitors. Programming the robot with a floorplan of the facility and several routes through it, the robot can guide a visitor to their destination.

NTT claims that the robot has been upgraded to help spot issues with product quality, and cleaning, but did not give much more details. The system can also be remotely controlled by humans elsewhere.

"For example, one out of six or ten operators manage and support a data center by operating a robot in a data center in London from Tokyo office," Imaeda said.

"After that, as it gradually penetrates, we would like to proceed with the project in order to approach the ideal of complete unmanned movement in which robot can make an autonomous judgment."

This, he said, could lead to data centers that are fully lights-out unmanned sites. Such a step would require a technological leap, however.

A video shared by NTT, viewable below, shows a robot torso on wheels. It has two arms, with three-fingered claw-like hands. They are shown awkwardly grabbing cables in a server, but it does not appear to have the fine motor skills required to actually do any cabling work.

Also in the video is a CCTV camera that descends from the ceiling to inspect servers.

The robot in the video looks likely to be a SEED-R7 series machine from Seed Solutions, a subsidiary of Japanese engineering and robotics firm THK Co., Ltd.

Other companies are also trying to increase the number of robots in the data center, but progress has been slow.

Back in 2020, Switch said that it was entering the robotics market with special Sentry Robots, in a splashy announcement that it said at the time would become a separate business line. But references to the project have been quietly removed from the Switch website, and the company has not responded to requests for comment about the status of the robots.

Utah-based Novva has gone for a simpler approach - instead of developing its own robots, it is using Boston Dynamics Spot robots. Again, the systems are focused on the comparatively simple task of surveillance and security, rather than facility maintenance.