NTT Data conducts data center robot trial, will roll it out across Japan and commercialize offering

NTT Data has conducted what it said was a successful trial of a robot in a data center and will be rolling it out to its 15 facilities in Japan as well as commercializing the offering.

The company deployed a torso-on-wheels robot equipped with arms & basic claws as well as various sensors for remote monitoring and inspection duties. 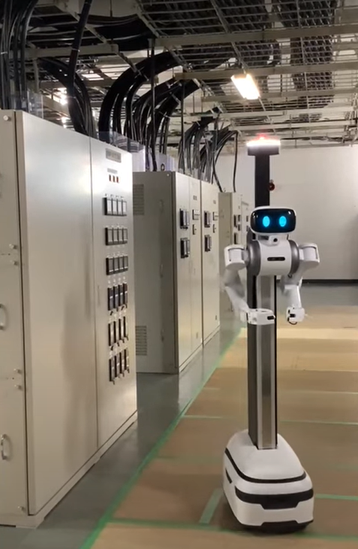 The company said it held test operations at its Shinagawa Data Center in Tokyo from August to November 2022, enabling the shortening of work hours and remote work execution. NTT Data will now gradually expand this initiative to its 15 data centers nationwide.

“We will proceed with the introduction of robots at our data centers nationwide from April 2023,” the company said in a post this week.

The company used a customized robot from the Japanese company Ugo Co., Ltd, led by Ken Matsui. The machined featured a 4K camera, an ‘odor’ sensor to detect humidity, temperature, and ‘substances in the air’, as well as a microphone and thermal camera.

The initiative covered ‘various meter measurements, lamp checks, and the detection of abnormalities in appearance and offensive odors’ as part of equipment inspection work. The automatically patrolling robots, equipped with cameras and sensors, reportedly replaced 1-2 hours’ worth of inspection work per day.

“As a result, it is possible to obtain effects such as reduction of work hours, work style reform by remote work, and visualization of expert know-how by digitization,” NTT said. “We aim to reduce inspection work time by up to 80 percent by automating the recording and reporting work that currently needs to be performed by the person in charge using AI.”

As a result of the test, NTT aims to commercialize the offering as a remote/automation service for equipment inspection work in 2023. For commercial provision, Ugo will utilize its new ugo mini machine, which was developed in partnership with NTT Data as a result of the data center trials.

In what was seemingly a separate initiative within the wider company, another part of NTT has also been trialing data center robots this year. In February NTT Communications said it was working on a data center robot, saying it would help spot issues with product quality, and cleaning.

Further details were sparse, but videos showed a robot torso on wheels with two arms and three-fingered claw-like hands. The machine was likely to be a SEED-R7 series machine from Seed Solutions, a subsidiary of Japanese engineering and robotics firm THK Co., Ltd.

Other companies are also trying to increase the number of robots in the data center, but progress has been slow.

Back in 2020, Switch said that it was entering the robotics market with special Sentry Robots, in a splashy announcement that it said at the time would become a separate business line. But references to the project have been quietly removed from the Switch website, and the company has not responded to requests for comment about the status of the robots.

Utah-based Novva has gone for a simpler approach - instead of developing its own robots, it is using Boston Dynamics Spot robots. Again, the systems are focused on the comparatively simple task of surveillance and security, rather than facility maintenance.

In China, Huawei and Alibaba are known to operate their own custom data center robots, while South Korea’s Naver was said to be planning to use robots at its Cloud Ring data center in Sejong City.

In November Fujitsu said it planned to trial a private 5G network at a data center to enable automatic equipment inspection via robot.

The trials, to be held at its Yokohama Data Center in Yokohama City, Kanagawa Prefecture, will involve the use of an autonomous robot equipped with a 4K camera to patrol the facility and capture video of equipment, including servers. The data will be transmitted locally by private 5G to analyze on-site conditions with AI to detect any abnormalities at an early stage. Fujitsu said it aims to “create a system that can support the monitoring of conditions on the ground and recovery work, even from a remote location.”

After the trial, Fujitsu plans to utilize the knowledge gained from this trial to implement similar systems in its other data centers, and eventually offer it as a solution to other data center operators.