Plans for $40 million floating data center in Ireland under threat

Some local businesses oppose the project that would put a permanently moored data center on a barge in Ted Russell docks, Limerick

Planning permission for a €35 million ($39.9 million) floating data center in Limerick's Ted Russell docks is in troubled waters after a wave of complaints from local businesses.

There have been 20 complaints from companies based in and around the docks since the plans were submitted; many are citing the large amount of usable dock space that the barge will take up, as well as the possibility that the data center could limit the growth of the docks. 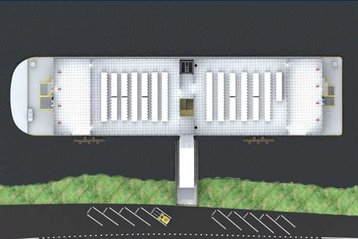 If approved and built, Nautilus' facility would become the world's first commercial data center to be installed on a barge. Designed to deliver high-efficiency hosting from moorings, the barge would be running the surrounding water through a secondary circulating system, so the facility would effectively operate without consuming any additional water.

The Limerick Docks data center, matching the size of vessels already present at the site, would comprise four data halls spanning two floors above deck, with cooling and power systems below. And, just like regular mooring vessels, the barge would be tied to the docks and accessible via a gangway ramp.

Since the facility would take up the space of a moored ship, local businesses are concerned that it would impede the ability of other shipping companies to conduct their business. The proposed floating barge could take up over 20 percent of the available berthing at the docks. In addition, a collective of local businesses called the Limerick Port Users Group is concerned the project could reduce the number of customers coming through the docks.

Several of the members sent complaints to Limerick City and County Council saying that the data center will “severely and irrevocably compromise the ability of the port to meet the existing needs of its users. The Limerick Port users have conducted a study which outlines the proposed development will reduce the capacity of the dock by 23 percent, severely hindering its ability to handle current tonnage levels and hinder future development.”

From 2014 to 2017, there has been a 102 percent increase in the amount of ships coming through Ted Russell docks. The tonnage exported from the dock has increased from 301,000tn to 691,000tn over the same period. These figures are expected to increase year-on-year, as the Shannon Foynes Port Company has secured an EU transport corridor which will brig in investment to the port post-Brexit.

If approved, the planned facility would create 24 permanent positions, as well as 100 roles during construction of the barge. Nautilus has said that if its floating data center is approved, the project could be complete by 2020.