Data centers paying for what they use

The City of Quincy, Washington, is due to open a water treatment plant built with help from Microsoft.

The Quincy Water Reuse Utility (QWRU), announced in October 2020 will open on 30 June. It will provide water mostly for Microsoft data centers locally, saving up to 390 million gallons per year, enough for 5,450 residents, according to iFiber One News 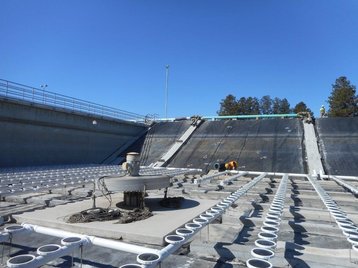 The QWRU will process and recycle cooling water for Microsoft's data centers which have operated in Quincy for many years. This will enable the City to keep potable well water for its citizens. It will be formally opened on June 30 at 3 p.m, at 1600 13th Avenue SW.

It will have 10 water treatment facilities, which will take in the waste water from the site, and clean it up for reuse in the data centers on its 270-acre campus in West Quincy.

Microsoft provided most of the capital for the project, which also has support from state and federal governments.

"Microsoft has been a good partner," city administrator Pat Haley told DCD in October, explaining that the new facility was designed "specifically for the treated water that comes from the blowback on the data center cooling which you can't send to our other treatment system because it'll foul up the process."

Around ten percent of Qunicy's water is used by local data centers. Data centers in Quincy normally cycle water four or five times through their cooling systems before returning it to the city for treatment. Water is lost at the data center from evaporative cooling, and is also lost at treatment plants during the filtration process. The water in the new treatment plant will therefore need to be topped up, but this doesn't need to be drinkable water, and could instead be municipal and industrial water from the nearby canal.

The entire cost of the site reportedly runs into tens of millions, and the city could not have afforded it without Microsoft's support.

Quincy also has data centers belonging to Sabey, Intuit, Vantage, and Yahoo, all of which are welcome to join in this water treatment plant if they pay a share of the fees, DCD understands.