First 400MW phase due online next year, using as much power as thousands of homes

Riot Blockchain, Inc. is to build a cryptomine data center in Texas that will consume as much power as 800,000 US homes.

The company announced this week that it has initiated a 1GW development to expand its Bitcoin mining and hosting capabilities in Navarro County, Texas. If used constantly, 1GW would consume as much energy as around 800,000 homes, which on average consume 11,000kWh per year. 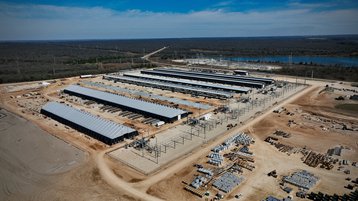 Roit said work on an initial 400MW of capacity had already begun on a 265-acre site, with immersion-cooled mining and hosting operations expected to commence in July 2023.

This first phase of the expansion includes land acquisition, site preparation, substation development, and transmission construction, along with the construction of ancillary buildings and four data buildings. Riot estimates that the total cost of the first phase of expansion will be approximately $333 million.

“Upon completion of the expansion, Riot’s developed capacity will total 1.7GW, establishing the company among the largest Bitcoin mining operations globally,” said Jason Les, CEO of Riot. “This expansion is a testament to the company’s demonstrated ability to build and deliver high-quality large-scale digital asset infrastructure for its Bitcoin mining operations and future hosted clients.”

Fort Worth government to mine crypto in City Hall

In other crypto news, Fort Worth city's government is to start mining cryptocurrency in its own data center in Texas.

This week the city council members passed a resolution advocating for the implementation of Bitcoin mining machines and authorization of their use. Three S9 Bitcoin mining machines – donated by the Texas Blockchain Council – will run in the Information Technology Solutions Department Data Center located at Fort Worth City Hall. After six months, the city will evaluate the program.

“With blockchain technology and cryptocurrency revolutionizing the financial landscape, we want to transform Fort Worth into a tech-friendly city,” Fort Worth Mayor Mattie Parker said. “Today, with the support and partnership of Texas Blockchain Council, we’re stepping into that world on a small scale while sending a big message – Fort Worth is where the future begins,” the mayor added. “These small but powerful machines mark Fort Worth’s larger commitment to becoming a leading hub for technology and innovation.”

“The Texas Blockchain Council is thrilled to be part of this first-of-its-kind pilot program as the City of Fort Worth begins mining Bitcoin. By starting small to learn as they go, Fort Worth is positioning itself to be the bitcoin mining capital of Texas. The state as a whole has already established itself as the bitcoin mining capital of the world,” added President and Founder of Texas Blockchain Council Lee Bratcher. “We are grateful for the support of several of our member companies, specifically, Luxor Technologies and Rhodium Enterprises, as they provided strategic guidance for this project.”